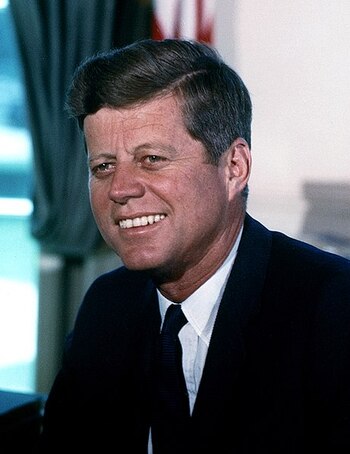 John Fitzgerald Kennedy (May 29, 1917 – November 22, 1963), often referred to by his initials of JFK*  to his friends, family, and in any less-formal setting he was "Jack", as Lloyd Bentsen memorably reminded Dan Quayle in 1988), was the 35th President of the United States (1961–63), succeeding Dwight D. Eisenhower and followed in office — after his assassination, which gave rise to a million Conspiracy Theories — by Lyndon Johnson. The first president to be born in the 20th century and the 12th from the Democratic Party, he was known for his particularly inspirational turns-of-phrase in his speeches and overseeing an era of American history rife with social and political turmoil. Kennedy was not only the youngest-elected president, at the age of 43 (the youngest to become president was Theodore Roosevelt, who was 42 at the time), but also the first Irish-American and the first Roman Catholic to hold the office (and the only one until Joe Biden, just over 57 years later), as well as the last US president (thus far) to die in office. His presidency lasted for just over one thousand days.note 1,036. Although a book by historian Arthur Schlesinger chronicles it as A Thousand Days.

A youthful, glamorous and invigorating figure, JFK — along with his attractive wife Jacqueline Bouvier and their young family — was seen as introducing a new and liberating era to American political and cultural life after the stifling and stuffy days of The '50s, and his time in office was dubbed "Camelot" soon after his death. Despite this, his short term was filled with crises and political upheaval, such as the CIA-directed 'Bay of Pigs' invasion of Communist Cuba, which went belly-up. This failed invasion soured relations with Cuba (never that strong to begin with) and eventually led in 1962 to the Cuban Missile Crisis. Meanwhile, similarly to Franklin D. Roosevelt's bout with a paralytic illness, JFK was constantly struggling to hide and cope with his Addison's Disease and hypothyroidism, which almost jeopardized his 1960 election campaign. He had his successes as well, such as when he called for the formation of a small maritime unit that would be known as the Navy SEALs. He is the reason US Army special forces wear green berets. Also similarly to FDR, Kennedy was at home talking with the press like almost no other president before or since — the difference being that JFK's weekly press conferences and displays of immense charisma were all caught on film

Kennedy was in truth a Handicapped Badass on par with (and possibly even surpassing) FDR, and a Determinator on the same scale, as he possibly suffered from an autoimmune disorder

.note  Now hypothesized to be Type-2 Autoimmune Polyendocrine Syndrome, known for short as APS-2, a symptom of which is Addison's Disease, with which he struggled as an adult He was incredibly sick as a child and frequently hospitalized, which continued through his adolescence and into adulthood. This, coupled with chronic lower-back problems and being permanently underweight, led to his being medically disqualified when he attempted to enroll in the US Army's Officer Candidate School. However — thanks to his father’s connections and a grueling, months-long exercise regimen to strengthen his back — he managed to join the US Naval Reserve in 1941, a few months prior to Pearl Harbor. Ultimately he would serve aboard a handful of Motor Torpedo Boats in the Navy, most famously aboard PT-109, due to his successful effort to rescue his crew after that vessel was rammed and broken in twain by the Japanese Destroyer Amagiri

. The ramming killed two crew but Kennedy managed to get all the surviving hands to an island, including one he had to tow while swimming with a life-jacket strap clenched between his teeth. He re-injured his back while performing that rescue. He later underwent spinal fusion surgery as a Senator in order to continue walking, almost dying from an infection afterwards. In the White House he needed a rocking chair in the Oval Office to deal with the pain, as well as a Dr. Feelgood pharmaceutical regimen, and he could not bend over to pick up his own children.note  In a Mathematician's Answer, having to wear a back brace due to the steroids he took to treat Addison's Disease causing issues with the bones in his back is exactly the explanation to why JFK died in Dallas — it meant he was quite literally a sitting target who couldn't duck— or even crumple forward — after Oswald's first shot. There is a good bit of modern speculation as to just how long JFK would have lived, and/or been able to cope with the rest of his presidency and a potential second term, had he not been assassinated — his health was that bad. His Catholicism illustrates just how often he danced with death — he was given the Last Rites

four times prior to Dallas.

Domestically, the Civil Rights Movement proved a vexing political problem for his administration. The Democratic Party's power base was then in the South, so Kennedy was reluctant to risk alienating his white supporters there. However, Martin Luther King Jr. and his fellows were not about to let this stop their crusade for racial equality and justice. To that end, they forced the issue by staging non-violent protests and similar actions to provoke white racist authorities and mobs to go berserk against them. Although this was of course dangerous and led to casualties, Kennedy could not ignore the resulting footage of such white supremacist brutality and eventually moved to support their cause.

Kennedy had a very close relationship with Harold Macmillan, who was the British Prime Minister for all but the last month of his time in office, to the point of viewing Macmillan as something of a mentor figure. (It probably didn't hurt any that Kennedy's late sister Kathleen had been married to Macmillan's nephew by marriage.) In stark contrast, JFK had an absolutely horrible relationship with the Canadian Prime Minister John Diefenbaker for most of his time as President, mostly over the issue of putting US missile defenses on Canadian soil. Things got so bad that Kennedy even wound up lending staff and financial support to rival Lester B. Pearson, helping him to dethrone Diefenbaker as Prime Minister in early 1963. Technically, Kennedy might have broken a few laws by doing this, but — considering that Pearson was way more cordial towards him, and the US, than Diefenbaker — nobody cared enough to make much of an issue over it.

Similarly, the press had a "gentleman's agreement" not to mention Kennedy's rampant womanizing, as it wasn't considered to be in the public interest at the time. (To illustrate the strength of the agreement, consider: JFK once told White House press pool reporters that he wasn't "done" with a woman until he'd had her "three different ways.") Suffice it to say that being handsome, witty, charming and death-defying before getting elected President, JFK Really Got Around his whole life long, and only partly due to the steroids he took later. Kennedy's most famous extramarital affair was probably with Marilyn Monroe.

On November 22, 1963, Kennedy visited Dallas, Texas as part of campaigning for his upcoming run for re-election. As his motorcade passed the Texas Book Depository at Dealey Plaza, shots were fired; Kennedy was hit in the head and torso, and rushed to hospital where he was later pronounced dead. Although a single gunman, Lee Harvey Oswald, was later arrested and identified as the main suspect of the assassination, numerous irregularities in the record — not to mention Oswald's own murder two days later, by a mob-connected nightclub owner named Jack Ruby — soon gave rise to numerous conspiracy theories about who had really killed Kennedy, and setting off unanswered questions. Meanwhile, his death was recorded in what is known as the Zapruder Film.

Due to his iconic status, Kennedy is still liable to be invoked by fanboys and wannabes, who thereby tend to make themselves very much liable to the Pretender Diss - just ask Dan Quayle

When he's portrayed in fiction (and isn't there purely to be killed), expect to hear a highly exaggerated version of his quite distinctive New England accent. He was famous for his harnessing of mass media to rally support, and as a result, he remains somebody who can be recognized simply by the sound of his voice. To this day, many attempts at "Bawstin" accents will try to simply copy Kennedy's speaking patterns, even though many New Englanders will be among the first to tell you that the Kennedys are the only people who actually speak like that. For an example of JFK's accent from the man himself, here is an audio clip

of the President chewing out a USAF general over the phone, about the press getting access to Jackie's maternity suite at an Air Force base in 1963.

Note: Please only add examples where Kennedy appears as a character. If he is only shown in order to be assassinated, put the entry under Who Shot JFK?.
open/close all folders
Comedy
Comic Books
Fan Works
Films
Literature
Live-Action TV
Music
Tabletop Games
Theater
Video Games
Webcomics
Western Animation
Feedback