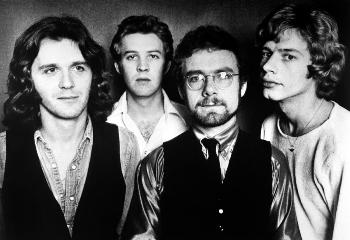 The Starless and Bible Black lineup: (L-R) John Wetton, David Cross, Robert Fripp, and Bill Bruford.
"Everything you've heard about King Crimson is true. It's an absolutely terrifying place... In Yes was an endless debate about should it be F♮ in the bass with G♯ on top with the organ, or should it be the other way round. In King Crimson, almost nothing was said. You were just supposed to know."
— Bill Bruford, 2009 interview
Advertisement:

The only constant member of the band is guitarist and mastermind Robert Fripp, and indeed the band's 1968–74 period was plagued by constantly shifting lineups. Its most stable lineup was between 1981 and 1984, where they toured as a four-piece, and from 1994 to 1998, when that same four-piece took on two additional members. The band was revived in 2013 as a seven-piece band that contained two new members, along with five previous members, including one (Mel Collins) who'd hadn't played with the band for nearly 30 years.

Their music is characterised by really impressive instrumental technique, Uncommon Time signatures, Epic Rocking, pretty extreme dynamic contrasts, lots of Improv, lyrics that usually sound cooler than they read (when they appear), and a large percentage of tunes that seem specifically designed just to fuck with your head.

Not counting any ProjeKcts — side albums from various subsets of the band, used as "research and development", according to Fripp — King Crimson had been on another hiatus since 2009. And in August 2012, Fripp announced his retirement from live performance, seemingly disbanding the group.

However, in September 2013 he announced the new seven-piece lineup (which included three drummers) which began touring in 2014. It initially was billed by Fripp as a 'farewell' tour, but then the seven-piece line-up also toured in 2015 and 2016, and then toured as an eight-piece in 2017 and 2018, and then went back to a seven-piece for a 2019 tour. But, as Fripp is in his seventies and his dissatisfaction with the state of the music industry is well documented

, each re-formation or line-up change could someday be the last depending on his mood. In a begrudging nod to current media consumption tastes, Fripp announced in 2019 that King Crimson's studio records would finally be available on streaming services starting in May.

Fripp has had a strident policy of no photography or recording since the band's inception. However, he has acquiesced (slightly) to the smartphone age, allowing for photographs when himself and Tony Levin (an accomplished photographer as well as bassist) take out their cameras at the end of the show. note Levin keeps a photo diary on his personal website

, comprised of former and current members who also play the band's repertoire. Four of the current septet band are in these units as well, putting the status of both effectively on hold. While Fripp for the most part gives his blessing to these groups, his reaction to them is mixed depending on how well they represent the band's aesthetic. An underwhelming

The band has released several live albums; the most-well known are arguably Earthbound (1972) from the lineup that recorded Islands, and USA (1974) from its John Wetton-led early lineup. Other live releases that rank highly amongst fans are The Night Watch and The Great Deceiver, both which document the Wetton-era lineup, and Absent Lovers, which represents the 1980's-era Belew-led four-piece lineup. Fripp has also released 50 King Crimson and ProjKct live albums between 1998-2019, independently through the King Crimson Collector's Club series, which was subscription-based at its inception, but of which all are now available individually.

The latest 'Mark VIII' line-up that formed in 2013 has yet to release a studio album, however, this line-up has released seven live albums/boxsets between 2014-2019, along with six 'Elements' sets, which are 2-disc sets that contain snippets of new studio material, along with live & rare tracks that are a mix of the current and past line-ups.

Fripp's label, Discipline Global Mobile, also has nearly six hundred recordings available for sale via download, ranging from full concerts (at times even entire tours) from every stage of the band, along with compilations of rehearsals, rare mixes, and demos. Fripp, ever the archivist, notes each recording's sound quality and source, at times along with notes from his diary. note Fripp also has two full-time engineers working for Discipline Global Mobile who work on unearthing, organizing, and re-mastering content.

The Tropes of the Crimson King:

"Discipline is never an end in itself, only a means to an end"