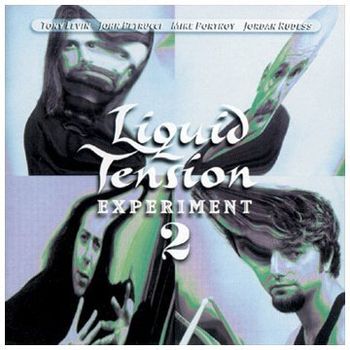 "CAUTION: "Three Minute Warning" is not for the musically faint-hearted, impatient, or critics of extreme self-indulgence. If you fall into any of the above categories, please hit the stop button on your CD player after track # 8"
— Despite being a warning for one song, this more or less describes the band as a whole.

Sometime near the end of The '90s, Dream Theater's drummer, Mike Portnoy, was asked by his company to form a Progressive Rock/Metal supergroup. Said group was composed by Portnoy, his Dream Theater comrade John Petrucci on guitar, the legendary bassist Tony Levin and a then-not-so-notable keyboardist named Jordan Rudess. Thus, the seeds for Liquid Tension Experiment were planted.

The band released only two albums before Rudess' definitive incorporation to Dream Theater and the obvious disbandment, at least for studio recordings, since three-quarters of the band were composed by Dream Theater members. It didn't stop Portnoy from releasing several other albums [live recordings] via his own label, Ytsejam Records. In 2020, a reunion was announced with, with a third album released in 2021, and possible plans for a fourth album.

There was a spinoff of this band, called Liquid Trio Experiment, which was composed of the same members, except one of them, who happened to be Petrucci in the first album, Spontaneous Combustion, and Rudess in the second, When the Keyboard Breaks.

Both bands provide examples of: