Music / Three of a Perfect Pair 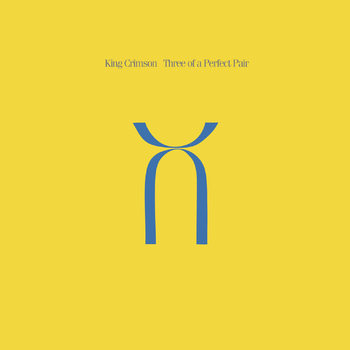 "Oh, what a perfect mess!"
Advertisement:

Three of a Perfect Pair, released in 1984, is the tenth studio album by English Progressive Rock group King Crimson. The final entry in the Incline to 1984, the band's trilogy of New Wave Music albums under their "Gamelan Trio" lineup, it presents a middle-ground approach between the experimental Discipline and the commercially accessible Beat, influenced heavily by the Troubled Production of the latter and the strain in placed on the band. The members attempted to diffuse lingering tension among each other well in advance, but still found themselves unable to fully reconcile the radically different approaches of their previous two albums, reflected in the more anxious tone of the music on this record. As a result, they made the decision to split Three of a Perfect Pair directly down the middle, providing a side of accessible songs and a side of more aggressive, avant-garde material.

Although it ended up being the highest-charting of the 80's trilogy in the UK (and indeed their highest-charting release in the country since Starless and Bible Black), peaking at No. 30, in the US it was their lowest-charting album since Red, only reaching No. 58 on the Billboard 200. Fripp himself had grown disillusioned with the Gamelan Trio configuration of the band and how it operated, and would dissolve King Crimson a second time following the album's supporting tour, exactly ten years after their first breakup; another decade would pass before Fripp decided to reform the band again.

Three of a Perfect Pair was supported by two singles: the Title Track and "Sleepless".

This dead end demolishes the tropes: