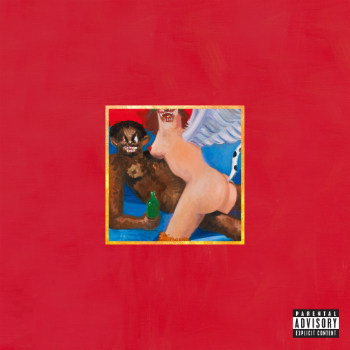 My Beautiful Dark Twisted Fantasy is American rapper and musician Kanye West's fifth album, released on November 22, 2010. The album was initially planned as a continuation of his trilogy of college-based albums (The College Dropout, Late Registration, and Graduation) to be named Good-Ass Job, but the concept was eventually discarded.

The story behind its creation is now something of music legend. By the end of 2009, Kanye was likely the single most hated man in American pop culture on account of him infamously interrupting Taylor Swift at the 2009 MTV Video Music Awards. In the face of the titanic public backlash and negative media coverage, the latter of which disgusted him particularly, Kanye cancelled a scheduled tour with Lady Gaga for his previous album 808s & Heartbreak without explanation, instead going on a self-imposed exile in Oahu, Hawaii.

The album was recorded across 2009 and 2010 primarily at Avex Recording Studio in Honolulu, where Kanye block-booked the three session rooms indefinitely and worked practically around the clock, with additional sessions at Electric Lady Studios and Platinum Sound Recording in New York and Glenwood Place Studios in Burbank, with the help of a long list of rappers, producers, singers, engineers, and session musicians (more than ninety!). Alongside single releases, the album was marketed through a weekly series of free music releases entitled GOOD Fridays alongside a 35-minute short film named after the track "Runaway".

My Beautiful Dark Twisted Fantasy received rave reviews, with critics applauding the album's musical range, production and thematic material. It was a go-to for the #1 spot of many publications' year-end lists, and has gone on to be considered one of the best albums of the 2010s and of all time, with individual songs like "All of the Lights", "Runaway", "Power", and "Monster" taking equally high positions in song rankings.

The album won three Grammy Awards for Best Rap Album, as well as Best Rap Song and Best Rap/Sung Collaboration ("All of the Lights"). However, there was mass controversy over the album not being nominated for Album of the Year alongside Watch the Throne (Kanye's collab album with Jay-Z), which many felt was an Award Snub. Kanye has stated that this was his own doing due to releasing the two albums in the same year.

The album was listed at #17 in Rolling Stone's most recent (September 2020) list of the 500 Greatest Albums of All Time, making it the second highest-placing hip-hop album on the list (behind It Takes a Nation of Millions to Hold Us Back by Public Enemy at #15), as well as the highest-placing album from the 21st century. It’s also the album with one of the biggest jump between the last time they updated the list in 2012, where it was #353. It also got an incredibly rare initial score rating of 10/10 from Pitchfork, making it one of only 12 albums in the site's history to achieve that rating.