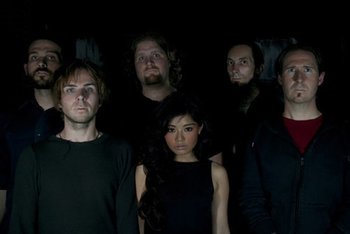 The band's lineup circa 2003.
Advertisement:

Kayo Dot is an eclectic band from New York, NY (formerly Boston, MA). They are most frequently classified as Avant-Garde Metal, Progressive Metal or Progressive Rock, but as their style varies widely from release to release, it is very difficult to pin down. The band is a Spiritual Successor to maudlin of the Well, which generally tended to be Progressive Death Metal.

You can stream basically everything Kayo Dot has recorded, as well as quite a lot of band leader Toby Driver's other work, at their Bandcamp

. (This includes, but is not limited to, several soundtracks he has composed for various media projects; most of maudlin of the Well's output; In the L..L..Library Loft, a Kayo Dot album in all but name that was released under his name due to Executive Meddling; the side projects Tartar Lamb and Tartar Lamb II; and two further solo albums that were actually intended as such, Madonnawhore and They Are the Shield.)