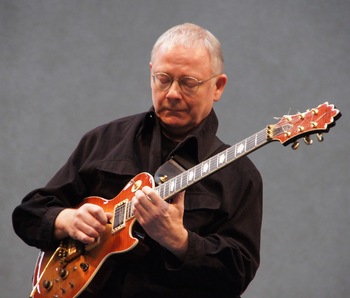 Robert Fripp (born May 16, 1946) is a British musician best known for being the founder and guitarist of the long-running and influential Progressive Rock band King Crimson. While not officially the frontman, he is the only permanent member of the group and viewed as its mastermind, to the point where he is consistently the sole authority on whether or not the band stays together, dissolves, or reunites.

Outside of King Crimson, he also has a prolific career of solo music and collaborations with musicians such as David Bowie, Brian Eno, Peter Gabriel, and Talking Heads, both as a session musician and as a co-star. His music is known for being very experimental, ranging from genres such as Progressive Rock, Ambient, and art rock. This vibrant discography contains over 700 releases.

Fripp has also created sound effects for the Windows Vista operating system and has created many innovations to the world of music, including the tape delay system known as Frippertronics and new standard tuning. The latter would become a staple of his educational program Guitar Craft, which teaches prospective guitarists the various playing techniques he pioneered. Several alums from these courses would go on to collaborate with Fripp on studio projects, with one of them, Trey Gunn, even being inducted into King Crimson.

He is known for being difficult to work with, although he has mellowed out over time. He similarly shifted from his aversion to music streaming by putting his music on streaming services.