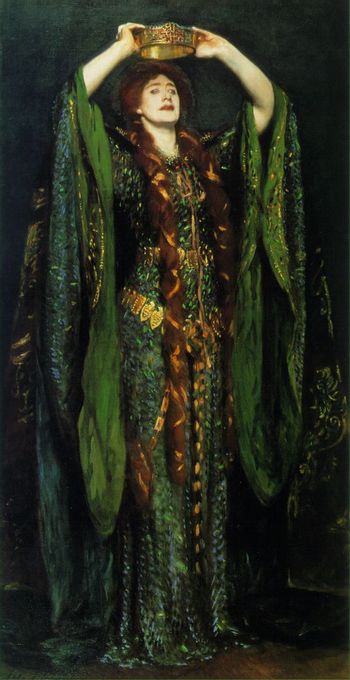 Fill me from the crown to the toe top full
Of direst cruelty!
"By the pricking of my thumbs,
Something wicked this way comes..."
— The Weird Sisters
Advertisement:

The Tragedy of Macbeth is a 1606 play written by William Shakespeare. It was written at the express request of King James I/VI of England and Scotland, who asked Shakespeare to present a new play to honor his visitor, the King of Denmark.

The play takes place in the Scottish Highlands. Fresh from putting down a rebellion against King Duncan, Lord Macbeth meets three witches who hail him as the future king. His scheming and ambitious wife convinces him to make the prophecy come true by killing Duncan. They succeed, but the two of them spend the rest of the play slowly going insane from guilt; Lady Macbeth begins sleepwalking, scrubbing at imaginary bloodstains and hallucinating, and ultimately kills herself. Macbeth himself enters into a paranoid frenzy, killing every potential rival in order to consolidate his power. The witches predict that "none of woman born" shall slay him, which gives him some reassurance... until he meets Macduff, whose family he murdered, and who was "from his mother's womb untimely ripped" — in other words, delivered via crude caesarean section from his mother's dead or dying body, not "born" as Elizabethans defined it. D'oh.

Many of the inconsistencies in Macbeth come from the fact that Macbeth was a real person who was featured in Holinshed's Chronicles, a best-selling popular history of Shakespeare's time. Holinshed played fast and light with the facts in many cases, though — for instance, he includes legendary or wholly fictional characters such as Fleance, who was supposedly an ancestor of the Scottish royal family. (In the play as produced now, Fleance disappears in Act Three: in the original 1606 presentation, he was brought back on stage after the play in a "dumb show" that explained he was the ancestor of the Stuarts.) Holinshead also refers to Lady Macbeth as "burning with an unquenchable desire to bear the name of a queen". In reality he had no historical justification for this — the only thing that's actually known about Lady Macbeth is that she existed (and that her first name was Gruoch, and that Macbeth was her second husband) — but Shakespeare turned that one sentence into one of his best-known female characters.

Shakespeare also takes liberties with the facts, although in his case his changes are justifiable as they improve the dramatic tension and the flow of the action; after all, he was writing a play, not a history. For instance, he makes Duncan a wise, old good king (at least superficially) instead of a young wastrel, he has Macbeth kill him while sleeping instead of in a fair fight, and he compresses the action into two seasons when the real Macbeth ruled for 17 years (and successfully). He also leaves aside the fact that the real Macbeth actually did have a legitimate claim to the throne* For centuries, the succession rule in Scotland was called Tannistry, by which the throne alternated between different branches of descent from the first King, Kenneth MacAlpin. Duncan's grandfather, Malcolm II, had been the first to attempt to abandon it in favour of his eldest grandson. By Tannistry, it would have been Macbeth's branch's turn.

Another source of the inconsistencies is that Shakespeare wanted to get in all kinds of things that he thought King James would like — witches, ghosts, the legitimacy of the Stuart line, the divine right of kings (something James was for, to put it mildly), and the portrayal of his Scottish ancestors as noble and warrior-like. The fact that Shakespeare snuck in the trope that "power corrupts, but absolute power corrupts absolutely" — possibly a criticism of James's desire for absolute power — was not noticed until after Shakespeare had died, and may not even be noticed these days by readers looking for the blood and guts. And yet, even considering all this, the play still endures to this day.

Superstitious actors refer to this as "The Scottish Play" (or, occasionally, "The Tartans"), due to the belief that speaking the main character's name brings bad luck. The head role is "The King" or "Mackers" anywhere outside the play itself. And though the script calls for it, sometimes things still happen, though they are usually less injurious. Some of the wackier ones talk about The Scottish Restaurant.

The play itself provides examples of the following tropes: