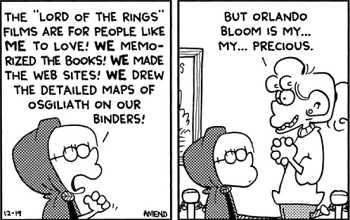 "Don't tell me you liked that filler stuff about a ring."
Bart Simpson: Alan Moore! You wrote my favorite Radioactive Man comics.
Alan Moore: Oh, really? You liked how I made your favorite superhero a heroin-addicted jazz critic who's not radioactive?
Bart Simpson: I don't read the words, I just like it when he punches people.
— The Simpsons, "Husbands and Knives"
Advertisement:

Anyone who creates works of fiction will often try to make it big and large to justify your money's worth. They want to make each new installment bigger and better than the last, adding in new stories and conventions, and just make it a lot more fun than the last title in a series. In short, development.

But no one else cares.

Many fans of anything watch movies, or play games, for exactly one reason (generally Rule of Fun) and one reason only. To them, your work has only one purpose: they're Just Here For Godzilla.

Simply, people are paying their own money for their own entertainment. Any other stuff that comes along with what they actually paid money for may be only seen as a minor distraction from that. Though in the best case scenario, those other things can actually add to the enjoyment of their one true goal, whether it be comedy relief in a usually dark film series or any new quirks in gameplay. Often, these things become cool only by association: "Look, it's a clip from that movie/show where this awesome thing happened!" or "Look! It's that actor/actress who was in that sweet movie one time!"

Depending on what you came for, however, it can feel like the creators are deliberately putting obstacles in your way to that destination. If you came to a movie for the action sequences, you could find yourself waiting well over an hour for the first big one, for example. Or maybe your favorite character in a video game is unplayable unless you accomplish some arbitrary task like playing the same mode a few dozen times. In fact, this is precisely where the term "cut to the chase" originated, as plenty of movies made during the early days were thoroughly uninteresting to their audience, but included an exciting chase at the end that people would come for.

Sister Tropes are: Bile Fascination; Play the Game, Skip the Story; Enjoy the Story, Skip the Game; Preview Piggybacking; Watch It for the Meme; Excuse Plot and Developing Doomed Characters.

Compare I Read It for the Articles, Complacent Gaming Syndrome, Cult Soundtrack, Black Sheep Hit, Estrogen Brigade, Mr. Fanservice, Ms. Fanservice, Testosterone Brigade, Dancing Bear, Wolverine Publicity (when the publishers attempt to invoke this reaction) Come for the X, Stay for the Y (where something besides the Godzilla comes into play), Watched It for the Representation (when portrayals of minorities drive viewership) and Best Known for the Fanservice (which is not necessarily what they come for).

Make With The Monkey Fights!

Who honestly cares about the human characters in a film where Kaiju are duking it out?

Make With The Monkey Fights!

Who honestly cares about the human characters in a film where Kaiju are duking it out?