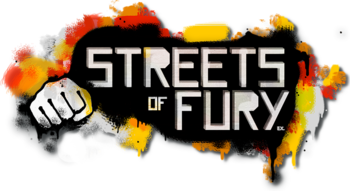 Powerless against the hardened
criminals roaming the city,
the army has gone on strike.

You and your gang have been hired,
directly from the streets of LA,
by the terrified French government.

Your mission is to take down the gang
leaders to restore security and give
power back to the president.

National Unity relies on your fists.

It is time to fight fire with fire.
— The introduction screen
Advertisement:

Streets of Fury is a Beat 'em Up game that was released on the Xbox Live Indie Games section in 2009, later receiving an Updated Re-release on Windows PC via Steam on 2015, featuring many improvements over the original game. The best way to describe this game is that it has the simplicity of a Beat 'em Up, and the complexity of a Fighting Game. Among its main features include four player cooperative and competitive play, the use of Digitized Sprites, and the Security Level system, which increases by defeating enemies, pulling off long combo strings, playing on harder difficulties, completing challenges, and more. This game also features a playable cast of 17 characters (with 8 unlocked from the start), two campaigns with five stages each, and extra modes, such as a Challenge Mode, Survival Mode, Versus Mode, and it also allows you to fully customize your difficulty, provided that you level up your security high enough.

You may find the game here

. A demo is available on Steam.

Streets Of Fury provides examples of the following: