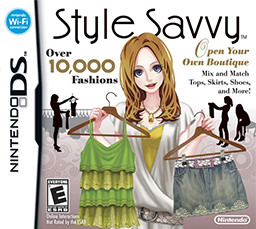 Open your own boutique!
Advertisement:

Style Savvy, also known as Nintendo Presents: Style Boutique, or Wagamama Fashion: Girls Mode, where "Self-Indulgent" is the translation of "Wagamama", depending on one's region, is a Nintendo published and Syn Sophia Inc. developed fashion simulator for Nintendo's handheld consoles.

The individual games are: