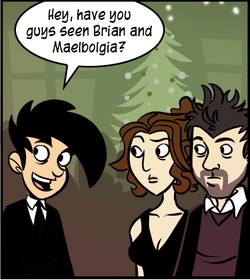 "Oh, they're over there, talking to Mary and Beldegar."
"In a group consisting of Sithis, Travok, Anastrianna and Kairon, the human fighter named Bob II sticks out. Especially when he's identical to Bob I, who was killed by kobolds."
— 4th Edition Dungeon Master's Guide, Dungeons & Dragons
Advertisement:

In some fantasy settings, people have names that you would expect to see in real life. In others, names are made up to sound exotic.

And then you have the mixed approach: people named Zelor and Lithnara alongside people named James and Catherine. That's this trope.

Don't expect the characters to acknowledge the distinction. Note that this doesn't count if the author is making a distinction e.g. as a Translation Convention for different cultures (cf. The Lord of the Rings, where the hobbits' and the nearby Men's Westron-language names are "translated" as more real-world ones, but no others are), or in a cosmopolitan setting where characters might be reasonably expected to have diverse cultural backgrounds without this necessarily being explicitly stated. This is very prevalent in fantasy settings, as those settings have less of a real-life grounding, facilitate the existing of a cultural melting pot.

In stories set in The Future, new names can be assumed to have been invented or become popular over the years, while older names would still exist alongside them. Can also happen within an Overly Long Name, where a Muggle-type name is liable to appear amid a long series of archaic names. Most often, the "normal" name is "Terry", "Scott", "Dave", "Steve", "Lyle", or "Kevin", because those names are somehow inherently funny. Sometimes happens accidentally in a cast full of Aeriths if an author finds a name from another language that sounds exotic to them, since it will inevitably sound like a Bob to viewers from the culture it comes from.

The Trope Namer is a combination of Final Fantasy VII, which has the eponymous "Aerith" alongside names like "Vincent" and "Barret", and a play on Alice and Bob.

Not to be confused (or transliterated) with Alice and Bob. When it's played for laughs, it's an Odd Name Out. See also Special Person, Normal Name. Compare Melting-Pot Nomenclature, Sesquipedalian Smith, Wacky Americans Have Wacky Names and My Friends... and Zoidberg. One of the names may be a Real Joke Name — for extra laughs, it might be "Bob".