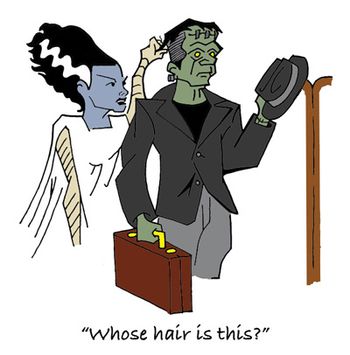 It is funny because Frankenstein's Monster is made of body parts from multiple corpses thus giving the question a double meaning.
"Aha! A strand of hair that isn't his! ...oh, wait, it's mine."
— Roseanne
Advertisement:

A wife suspects her husband is having an affair and can prove it by presenting him with the hair she found on his jacket. The hair obviously belongs to neither the husband or wife (whether because of hair color, length, or texture), and who else could that third party be but a mistress?

The guy will undoubtedly say that there's a perfectly innocent explanation. And sometimes, there really is. And sometimes the man doesn't even know someone with that hair color.

See also Lipstick Mark, a trope that plays out similarly, and Affair Letters, another type of evidence of affairs.

Not to be confused with Sex Hair.