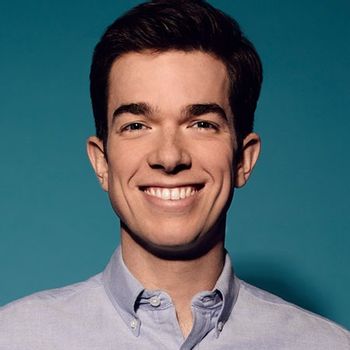 "I wanna tell you one more story before I get out of here..."
–from The Comeback Kid
Advertisement:

John Edmund Mulaney (born August 26, 1982) is a stand-up comedian, actor, comedy writer, Irish Catholic, and oh yeah, The Salt And Pepper Diner guy. Born in Chicago, Mulaney became a huge comedy fan at an early age, and he and his best friend would act out skits in junior high for his class. He is a graduate of Georgetown University in English Literature, and shortly after he moved to New York for a career in comedy.

After serving as an office assistant at Comedy Central, he became a writer for Saturday Night Live, where he remained for six seasons (and came back to host four times, the most an SNL writer who never crossed over to being a cast member has done and only one of three SNL writers who were never picked to be cast members to come back and host, joining Conan O'Brien and Larry David). He occasionally cameoed on Weekend Update, and you can also thank him and Bill Hader for the character of Stefon gracing your screen. Mulaney is a Primetime Emmy Award winner for his SNL work. Unfortunately, his FOX sitcom Mulaney, which debuted in 2014 and co-starred fellow SNL alumni Nasim Pedrad and Martin Short, didn't fare well in the ratings and barely managed a single season.

Most of you reading this, however, probably recognize John Mulaney more for his stand-up comedy, which is characterized by a theatrical, energetic delivery and a real knack for storytelling. He has four specials thus far: The Top Part in 2009, New in Town in 2012, The Comeback Kid in 2015, and Kid Gorgeous in 2018, the latter of which earned him another Primetime Emmy for writing. Famous bits include, of course, "The Salt & Pepper Diner," his love of Law & Order: Special Victims Unit, and his bits on his past as a blackout drunk.

In 2018, he broke into film acting by voicing Spider-Ham in Spider-Man: Into the Spider-Verse, and in 2019 he starred in John Mulaney & The Sack Lunch Bunch. His next role was Chip in the 2022 film adaptation of Chip 'n Dale: Rescue Rangers (2022), and will be followed by yet another voice role as Jack Horner in Puss in Boots: The Last Wish the same year.

John was married to make-up artist Annamarie Tendler from 2014 to 2021. After their separation and a stint in rehab for drug abuse (his former addiction had previously been a large theme in his stand-up specials), he confirmed in September 2021 that he was having a child with actress Olivia Munn; his son was born later that year.

Not to be confused with Grant Gustin, with whom he shares a resemblance.

Tropes associated with John Mulaney's career and his comedy numbers include:

Mulaney in his 2018 stand-up special "Kid Gorgeous" describes working with Jagger to write a song for his "Saturday Night Live" hosting gig. According to Mulaney since Jagger is a billionaire who's played to sold out crowds of adoring fans for 50 years, the normal rules of how to behave in life don't apply to him.

Mulaney in his 2018 stand-up special "Kid Gorgeous" describes working with Jagger to write a song for his "Saturday Night Live" hosting gig. According to Mulaney since Jagger is a billionaire who's played to sold out crowds of adoring fans for 50 years, the normal rules of how to behave in life don't apply to him.