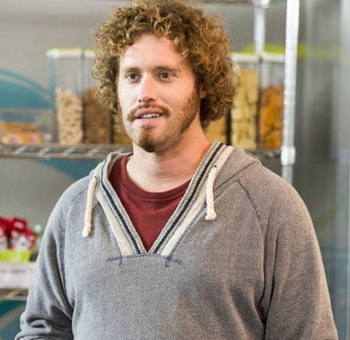 "T.J. Miller, aka the Stone Cold Killer, worked with all the big fives, still waitin' on Stiller / Been hustlin' since '03... got money for days, weeks even..."
Advertisement:

Todd Joseph Miller, usually known as T.J. Miller (born June 4, 1981) is an actor, stand-up comedian, producer, and writer. Born in Denver, Colorado, he's starred in a wide variety of films, usually comedies, including Our Idiot Brother (2011), Deadpool (2016) (2016), and Office Christmas Party (2016). As a voice actor, he's worked on the popular Gravity Falls program, the first two How to Train Your Dragon films, and 2010's Yogi Bear. In terms of TV, his role in the HBO sitcom Silicon Valley earned him the Critics' Choice Television Award for Best Supporting Actor in a Comedy Series' in 2015.

His comedic roles often involve a goofy, childlike glee, which goes well with his trademark Messy Hair. Depending on the work, this can slide from The Ditz to full-blown Cloudcuckoolander. Has a rap album (yes, really) called The Extended Play E.P., which he released in September 2011. You can get the gist of it by watching the official music video on YouTube of T.J. Miller performing the song called "T.J. Miller"

He was an up-and-coming star throughout the 2010s, being praised for his deadpan comedic delivery in live-action projects and, on the other end, his Large Ham delivery in animated projects, managing to score high-profile roles in either departments. However, a constant stream of public controversies and incidents involving him in the late 2010s effectively nipped his career in the bud.

Some of the tropes associated with the actor's works: