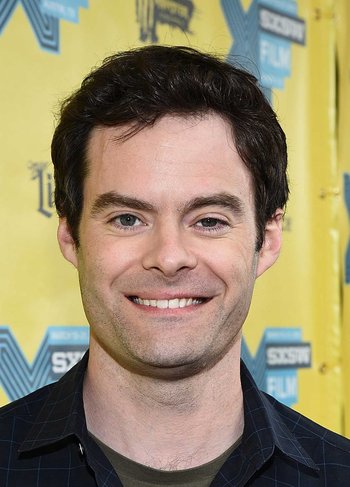 "I was always self-conscious about the fact that I didn’t have as much comedy experience as other people at SNL, and I kept thinking they were going to realize they’d made a mistake by hiring me."
Advertisement:

William Thomas "Bill" Hader Jr. (born June 7, 1978) is an American comedian, actor, voice artist, and writer. He is best known for his work on Saturday Night Live, his collaborations with Seth Rogen and Disney, being a writer on South Park, and his roles in films like The Skeleton Twins and Trainwreck.

Born and raised in Tulsa, Oklahoma, he attended Scottsdale Community College and joined the cast of SNL in 2005. He fulfilled the role of "the impressions master" during eight seasons (making Hader one in a handful of male cast members who has a very high number of celebrity impressions, joining Fred Armisen, Dana Carvey, Darrell Hammond, Jason Sudeikis, and Kenan Thompson). Among his popular impressions are: Vincent Price, Alan Alda, Clint Eastwood, Anthony Scaramuccinote which he did years after leaving the show, John Malkovich, James Carville, Prince Philip, Eliot Spitzer, Mike Sorrentinonote a.k.a "The Situation" from Jersey Shore, and Al Pacino (which was his first celebrity impression when he was hired on the show in 2005). Hader is also known for his memorable recurring characters as well: ornery and elderly field reporter, Herb Welch; Shell-Shocked Veteran and puppeteer student Anthony Peter Coleman; Hollywood news reporter Brady Trunk; Nitro, from Andy Samberg's low-budget Lazer Cats movies that Hader and Samberg try to pitch to Lorne Michaels; Devin, from the West Coast soap opera The Californians, Greg, a humanoid alien who somehow got a sports news anchor job; Vince Blight, the sadistic host of the equally-sadistic game show What's That Name?; Italian talk show host, Vinny Vedecci; and, probably Hader's most memorable recurring character ever: burnt-out club kid, Stefonnote though, it's implied that his real name is Stefon Zoleski-Bowie, since his brother [played by Ben Affleck] is named Dave Zoleski, and one Weekend Update segment that had Stefon on it had Stefon reveal that his father is David Bowie, who was alive at the time of that episode, who was hired by Saturday Night Live's Weekend Update to report on New York City hotspots and ended up falling for and marrying Seth Meyers.

His most recent work is a Mockumentary Genre Anthology series called Documentary Now! (2015–present). He's also the star and co-creator of the HBO original series Barry (2018), in which he plays the eponymous lead character.

From 2006 to 2018, he was married to director Maggie Carey, with whom he has three daughters.

Needless to say, these tropes have everything: