Break Them by Talking 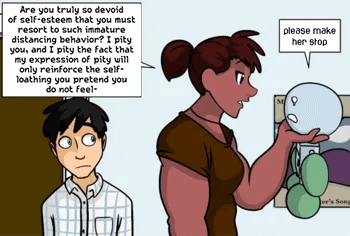 Her words hurt far worse than the Neck Lift.
Shinji: How much did you actually tell my father, anyway?
Rei: Few details. Only that everything he had worked towards and everything he had put myself and his only son through had been for nothing, and that he would die alone and unmourned, rejected by the only person he had ever truly loved.
— Doing It Right This Time
Advertisement:

This is often achieved by a kind of "The Reason You Suck" Speech, telling the other character how pathetic they are or perhaps how guilty of something terrible, perhaps a "Not So Different" Remark from someone unpalatable, but there are other ways of breaking someone down by talking. You could for example instead deconstruct the world, other characters, or their relationship with the victim. The important part is that they can't deny your words, at least not in the heat of the moment, and you gain a psychological advantage over them. Uncomfortable truths (or at least half-truths) and logical arguments are effective for making claims hard to deny, but hitting emotional weak spots is also important and can work even if your statements are not truly reasonable.

Results, when successful, range from the mere chance of getting to smirk in a satisfied way for rattling someone in an otherwise superior position; through distracting or demoralizing an opponent to make them easier to beat; to bringing about Break the Cutie, Heroic BSoD, Villainous Breakdown or even Face–Heel Turn, More than Mind Control, or Driven to Suicide. The most extreme form would be Mind Rape by just talking, but be wary of automatically calling every instance of Breaking Them by Talking that.

Obviously, this is easier to pull off from a relative position of power, such as when you have just defeated someone, or when interrogating a prisoner, but it goes both ways. It's even more impressive when someone manages to turn the tables on someone who was in a superior position. When this is done by one being interrogated — and only then — it's the Hannibal Lecture. Naturally, in between these cases, there is the one where both parties start out on an equal footing.

Some good tropes to use in the Breaking Speech include Brutal Honesty, Cowardice Callout, "Not So Different" Remark, Tomato in the Mirror, and They Died Because of You.

The distilled version of this is the Armor-Piercing Question. If the declarations used as a weapon come from simple clues, this is a form of Sherlock Scan. Some characters have the ability to do this as a superpower, which may be an example of Awesome by Analysis. Can be done as part of Evil Gloating. Shut Up, Hannibal! is a way of countering this trope. The opposite effect is done by a "No More Holding Back" Speech, when the hero tells about his own flaws and how they don't matter now. The reverse or "good counterpart" is the Kirk Summation or Talking the Monster to Death. Hannibal Lecture is a specific subtrope.