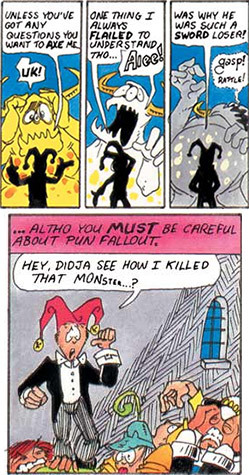 What's New? with Phil and Dixie

Jevee Ceeta: I've been in the military for twenty-five years, Ennesby. There's nothing you can teach me about nasty messages.
[later]
Captain Tagon: I see you've just been exposed to Ennesby's weapons-grade vocabulary.
Jevee Ceeta: My stomach is in my throat right now. It's trying to spit acid on the parts of my brain that remember reading his message.
— Schlock Mercenary, 20 May, 2003

There's a saying that sticks and stones can break your bones, but words will never hurt you. Well, with a weapons-grade vocabulary, words actually can physically hurt people. The words do not have to be spoken aloud but can be read. Hurtful knowledge, like a long-held secret, can apply as long as the recipient is physically hurt by the literal spoken or written words. Words delivering harm via magic, or through sheer volume, do not apply.

If the damage is done by magic, it's Words Can Break My Bones. If it's convincing another character or monster to hurt/kill themselves it's Talking the Monster to Death. Compare with Brown Note which is merely sound or image, not content. If it's a visual metaphor for the words hurting people (usually psychologically), then it's closer to Harsh Word Impact. Works using this trope will often discuss The Power of Language.