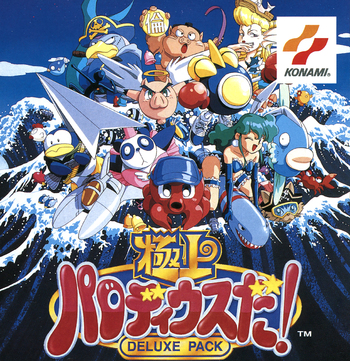 Are you sure you're sober when playing this?
Oh, we laugh at this game! Gradius is fine, but this is nicer!
— Parodius: Non-Sense Fantasy (European release of Parodius Da!)
Advertisement:

Parodius is pretty much Gradius on acid. Leave your common sense at the door.

A Turn-Based Strategy spinoff, Paro Wars, was released in 1997 for the PlayStation. There was also a Parodius Drama CD, and various pachinko and pachi-slot games.

Parodius plays much like the Gradius series, but much Fluffier and Nuttier. Many of the characters are drawn from other Konami games, including the Vic Viper (whose Option is itself playable in Sexy Parodius), Twinbee, Goemon, Pentarou the Penguin,note Who's the son of Penta Penguin from Antarctic Adventure-series Kid Dracula, and Upa the Baby Prince.

Characters original to the series have included:

The weapons and powerups are largely derived from Gradius, Salamander and Twinbee, but later games have characters equipped with weapons modeled after Konami's lesser-known Shoot Em Ups, such as Thunder Cross, Axelay and XEXEX, and from other shooters such as Darius, R-Type Leo and Truxton II. The enemies are all over the place, but if there are two common themes, it's penguins and moai.

No one ever reads this line: