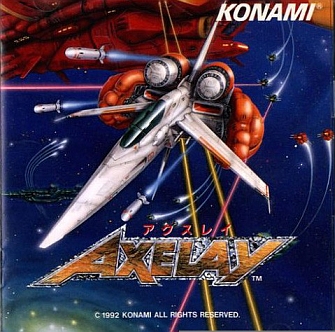 After months of tenacious enemy attack only one ship has survived: Axelay
Advertisement:

Axelay is a Shoot 'Em Up for the SNES, made by Konami and released in the US in 1993. It has also been released onto the Wii's Virtual Console service. It pushed the limits of what was capable for the SNES's graphics and sound capabilities.

Several elements make this shooter stand out from the pack. First, the perspective alternates between a behind-the-back perspective (which plays like the more conventional top-looking-down perspective) and a side view (a la Gradius or R-Type). The closest comparison to the behind-the-back look might be the original F-Zero.

Second, there are no power-ups. Before the level begins, you pick three weapons from a list of weapons that grows with each level. These weapons are either upgrades for your main gun, or an upgrade or a replacement for your missiles (of which you have infinite). The weapon that is not enhanced is comparatively weak. You can switch between the three at will, however, if you get hit by enemy fire, you lose the weapon you are using for the rest of the life, replaced by the regular weapon. In theory, you have four Hit Points, though it is debatable how far you could go with only the weak weapon.

Third, the soundtrack is a bit unconventional. Instead of just a song for all the bosses, each boss has a remixed version of the song for the stage you just went through. There's a strong jazz influence to the soundtrack, believe it or not. It also has some of the best 16-bit drums you'll ever hear.

Fourth, the bosses. This game has some awesome bosses.