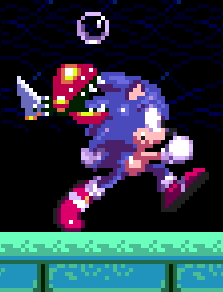 Still not as bad as getting hugged by Amy.
"Feel my head, touch my face;
two steps back, you're in my space."
— Sugar Ray, "Personal Space Invader"
Advertisement:

Your hero has just entered a dungeon/house/seemingly empty place. All of a sudden, a monster jumps out of nowhere and latches onto the hero with the nasty variant of The Glomp. It's the dreaded Personal Space Invader. The player must frantically mash buttons or rotate the joystick to get it off before strangulation ensues. Particularly lethal versions of the Personal Space Invader are capable of leeching health off the player.

Some versions deliver a Face Full of Alien Wing-Wong or an Orifice Invasion. May be combined with Full-Frontal Assault. Typically Nightmare Fuel in first-person games.

In most arcade Beat 'em Up games, especially the plethora of licensed ones made by Konami in the 1990s, enemies try to grab you so other foes can beat you up, and you're instructed to "Push Buttons Wiggle Joystick" to break free.

Not to be confused with No Sense of Personal Space. May overlap with Harmless Enemy, on those occasions where they don't actively remove health.

This trope is not about ownership of a Space Invader.