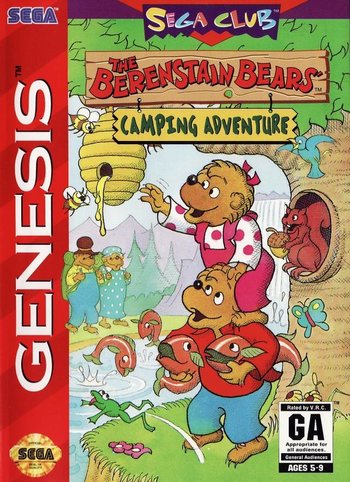 It's not that simple.
Advertisement:

A 1993 licensed Platform Game for the Sega Genesis, based on the Children's book series The Berenstain Bears. Developed by Realtime Associates.

The Bear family go on a camping trip. After collecting firewood, Brother and Sister Bear go on a hiking adventure in the woods, only to wander too far and wind up lost. The Bear siblings have to make their way back by going through five unique stages. Collect butterflies, find diamonds, catch fish, collect honey, scale tall trees, and survive against legions of homicidal wildlife.

The game can be played with either Brother or Sister Bear in a one-player game, or play as them both in a Two-Player Co-Op Adventure as two players control the two characters at the same time. Level design is changed in 2-Player, meaning that the Two players have to work together to get through the levels.