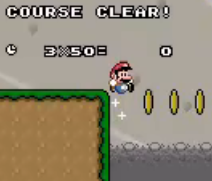 A Kaizo Trap is a type of video game Hope Spot: You have just finished a difficult challenge, such as defeating a boss, completing a level, or even winning the whole game. The battle is over and you breathe a sigh of relief. Then the game kills you during the victory cutscene, and you have to do it all over again.

The player has to find a way to defuse the trap before completing their actual goal, as their fate is otherwise unavoidable after triggering the cutscene and losing control of their character.

Known in Japanese as "Kōmei no wana" ("Kōmei's trap," Kōmei being the Japanese reading of Kongming, the courtesy name

for Zhuge Liang, a famous strategist from Romance of the Three Kingdoms).

Naturally, an example of Trial-and-Error Gameplay since you have no way to know of (even less so, expect) the trap beforehand. Commonly found in Platform Hell titles, as just one more sadistic Screw You on the part of the designers. The opposite of this trope is Fission Mailed and Press Start to Game Over. This is a specific kind of subversion of Instant-Win Condition.

Compare with Last Ditch Move, Taking You with Me, Cutscene Incompetence, and Fake-Out Fade-Out.