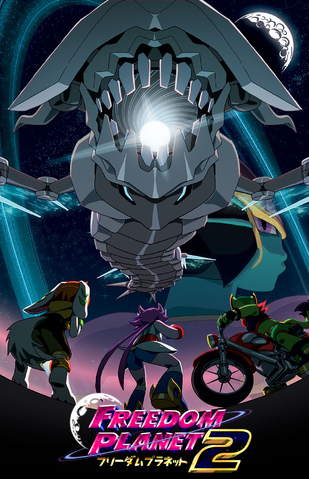 Do you remember what you began? You came to this world uninvited... you breathed in the sound of our screams... and out the flames of war. You watched us burn and buried the ashes... but I am the final ember! The world you saved will soon be purified! Just as you wished... magister... and all that will remain... are monsters.
— Merga
Advertisement:

The sequel to the surprise indie hit Freedom Planet, the game was an unexpected announcement on December 25, 2015. As described by the official website: "Join the heroes of Avalice as they face their greatest challenge yet! An ancient terror has emerged from the depths of the ocean. Merga, a water dragon from Avalice's oldest and deadliest war, has been freed from her crystal prison as a consequence of the Kingdom Stone's destruction. War is imminent once again, but this time, the heroes are split between sides. As friendships are tested, will the girls stand united when Bakunawa rises?"

The core gameplay will carry over from the original, albeit streamlined. The main trio's got redesigned, now sporting an older look, have all undergone training in the years since the last game to improve upon their skills. They now all have the ability to block attacks, something only Milla in the original game was capable of while the other two had to abuse abilities with invincibility frames to do, and they now have the ability to spend an amount of excess extra lives to revive on the spot instead of having to do things over from the last checkpoint. Considering how sadistic bosses in the last game could get, these were very welcomed additions. Along with a larger development team and moving over to the Unity enginenote the first game was developed in Clickteam Fusion mainly because it was the engine for Sonic Worlds, the Sonic-style fangame framework the first game used (and the first such framework of its kind, having accurate "classic-style" character physics, hence why it was widely used in the Sonic fangaming community for a long time and still in use today by some fangame creators), but due to the engine being antiquated, it made porting to consoles impossible without outside help (which also made patches more troublesome) and developing post-release content a headache, which was why Torque and Spade never became playable outside of pre-release builds, so GalaxyTrail felt like they needed to move to a more modern engine that better fit their needs, the main physics framework was coded by Christian "The Taxman" Whitehead of Sonic Mania fame, and the team is working with Christopher Sabat and his crew at the OkraTron 5000 audio production company for audio and voice recording work.

The game will be released on PC, Mac, Linux, Switch and PS4 on September 13, 2022. The first official trailer for the game can be found here

, and the 2019 Adventure Mode Trailer is here

. The PC demo is here

This game contains the following Tropes: