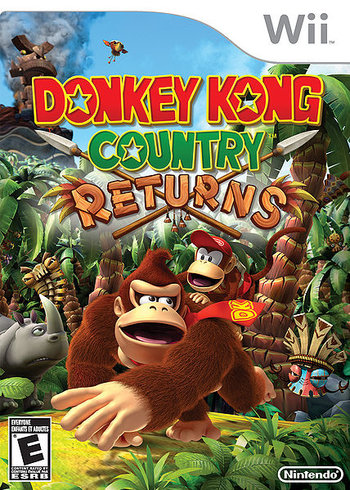 They're back again; and about time, too!
Now, get out there and give those little drum guys what-for. Yes, I said "what-for". I'm old. Get over it.
— Cranky Kong
Advertisement:

Donkey Kong Country Returns is a 2010 platform game produced by Nintendo and Retro Studios (of Metroid Prime fame). It's the first entry in the Donkey Kong Country series since Donkey Kong 64 in 1999, and the first side-scroller since Donkey Kong Country 3: Dixie Kong's Double Trouble! in 1996. The plot this time concerns the Tiki Tak Tribe, a group of evil tikis that have hypnotized the animals of DK Island, forcing them to steal Donkey Kong's treasured hoard of bananas for their own nefarious plans. Along with his best friend and second banana Diddy Kong, the big guy sets out to get them back.

The game features many popular series landmarks, such as pirate ships, mine cart rides, and of course, plenty of lush wilderness to get lost in, as well as the goal of collecting scattered bananas and golden K-O-N-G letters. A co-op mode has been implemented, but gone are King K. Rool and any underwater stages, as stated here

The game is the first in the series to be made with no cooperation from Rare, because Microsoft bought Rare in 2002. So once again, after 11 years, it's on like the eponymous ape.

A 3DS version called Donkey Kong Country Returns 3D was released on May 24th, 2013 in all regions.

A Wii U sequel called Donkey Kong Country: Tropical Freeze was released in 2014.