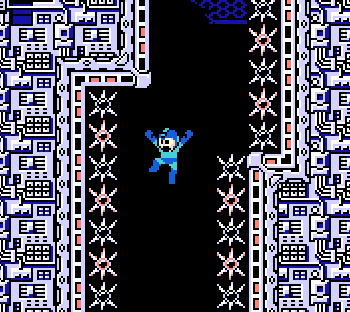 "Terrain is more deadly than any bullet."
— Devil Engine
Advertisement:

You have an incredibly powerful spaceship capable of killing hundreds of enemies per minute even before it's powered up. After collecting several Power Ups, you have weapons so powerful that you can destroy most enemies before they can fire a single bullet and destroy bosses in a matter of seconds. If you die, you'll be demoted all the way back down to a single direction of fire and will die over and over again, but that's okay. With all the weapons you have right now, most enemies don't stand a chance, and you can easily avoid the occasional Invincible Minor Minion, right?

There's only one problem. The walls are deadly, and even the slightest brush with them will kill you.

This trope is most common with Auto Scrolling games, especially in Space Shooters in which anything kills you in one hit. Even if your ship scrolls along at a relatively slow rate, if a corner of your ship so much as grazes the wall beside you, you will violently explode.

The deadly wall is usually one of a number of things that makes for a Nintendo Hard space shooter. Sadistic developers may fill later levels in the game with tight passages filled with twists and turns, expecting the player to navigate them while the level continues to scroll forward. Sometimes navigating these passages is much more difficult than dealing with hordes of enemy ships, making one wonder why the Big Bad even bothered constructing so many ships when a few maze-like passages (or just one big wall) would have done a better job. It may also raise questions about how your ship can maneuver around a winding path when the Auto Scrolling is supposed to represent your ship flying forward.

To add insult to injury, most older consoles such as the NES have digital d-pads. The luxury of an analog stick, where tilting the stick slightly moves the ship slowly, does not exist on these consoles. The combination of these touchy controls with an auto scrolling level filled with narrow twisty passages is enough to inspire plenty of controller throwing moments.

Somewhat realistic in some games, especially if the ship has a plane-like design and driving at very high speeds, as grazing a wall with a wing would have catastrophic results. In other games, it feels like the walls must be covered in some sort of weird radioactive substance to have the instantly deadly effect they have.

Not to be confused with The Walls Are Closing In, Smashing Hallway Traps of Doom, Descending Ceiling, or the Advancing Wall of Doom.