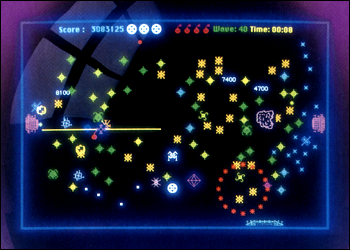 There was once a time when Apple Macintoshes were pretty well regarded for their games, and Crystal Quest was their Tetris — engrossing, addictive, and impossible to beat.

You used the mouse to control a little spaceship that looked like a hockey puck, collecting all the crystals in each screen-sized level. Once you had all the crystals, a gate at the bottom of the screen would open up, permitting you to escape into... a slightly harder version of the level you just played, with more types of enemies, more Space Mines to dodge, and more crystals you'd have to pick up. This masochistic treadmill of impending doom made the jump to several platforms, including the Game Boy, Amiga, and Xbox Live Arcade.

A sequel, Crystal Crazy, introduced more convoluted objectives such as assembling jigsaw puzzles and sinking pool balls in order. Some considered it a quantum leap over its predecessor, but it never won enough popularity to be ported beyond the Mac.