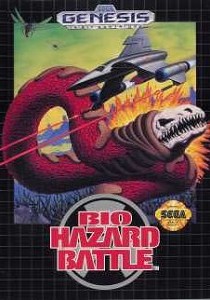 Bio-Hazard Battle (also known as "Crying - Biological War") is a 1992 Horizontal Scrolling Shooter released for the Sega Genesis platform. On February 26, 2007, it was also made available on the Wii's Virtual Console. No relationship to the Japanese name of the Resident Evil franchise.

During G-Biowar I (the first global biowar), a powerful new form of retrovirus was released as a deadly reprisal from the enemy. The viruses unleashed biological forces which couldn't be stopped, leaving Planet Avaron filled with new and deadly forms of life.

Only a few survivors remain in suspended animation in O.P. Odysseus, an orbiting platform circling Avaron. The space station's purpose is to keep the surviving humans alive until Avaron is habitable again. The crew of the Odysseus have been frozen in cryogenic tanks for hundreds of years, and now the onboard computer has awakened them. Computer probes show that conditions on Avaron are hostile but livable. The question is; where can the crew of Odysseus set up a colony?

The gameplay involves piloting an organic ship to Avaron, flying over areas which the probes have designated least hostile, ascertaining planetary conditions and, ultimately finding a new home for the remaining survivors.

Bio-Hazard Battle features a 2D side-scrolling shoot 'em up style of gameplay and the character chosen by the player can be moved in 8 directions by the D-Pad. The player can move, shoot, dodge, and block. To block an enemy projectile, the player must place the power star in the path of the projectile. There is also an array of different weapons at the ships' disposal. The player travels through eight levels, each one increasing in difficulty, with the last three only being available on the harder difficulties.