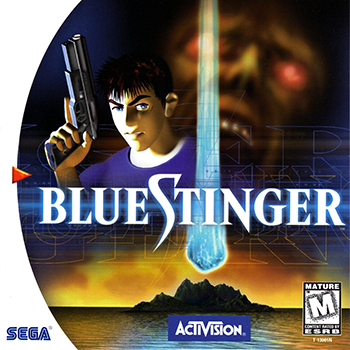 Blue Stinger is a Survival Horror game by Climax Graphics released for the Sega Dreamcast in 1999. An island is discovered in the year 2000 off the coast of Mexico, where it is thought that the meteorite that killed the dinosaurs had struck. Named Dinosaur Island, the site is mined for the next 18 years, until a second object impacts the island and causes an energy barrier to form around it, sealing it off from the outside world.
Advertisement:

Eliot Ballade, a police officer on vacation, is trapped inside the barrier as horrific monsters begin to appear. Ballade must work to find a way out, along with a boat captain named Dogs Bower, a computer expert named Janine King, and a strange water spirit known as Nephilim.

As with Over Blood and Galerians, there's a good chance you know of this game from Game Informer's Super Replay.