Late to the Tragedy 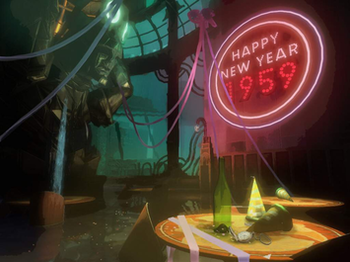 "Welcome to Rapture!"
"Sir, this place is dead. Whatever happened here, I think we missed it."
— Sgt. Apone, Aliens
Advertisement:

Something bad has happened in the setting. Something very bad. The player arrives some time later — days, perhaps, but possibly years, even centuries afterward. Their "official" goal is just to make it out of there with life, limb, and sanity intact, possibly liberating a treasure or two along the way. But in the course of achieving their own goal, they are going to find out a lot about the something that has happened, and the people it happened to. As part of the set-up, the player might have been sent or called specifically in response to the tragedy — to find out what happened, or rescue some one or some thing. Alternatively, they may begin not knowing even that the tragedy has occurred, just happening upon it through bad luck — the classic "Our car broke down so we'll take shelter in this abandoned castle" set-up.

Typically, often as a direct result of the player's investigation, they will find themselves needing to learn from what they can piece together of the past to stop this bad something from happening again — to them. In games with a supernatural angle, there will often be some component of "freeing the ghosts" of those involved in the past tragedy by resolving the situation.

Expect to find at least one diary (Scavenger hunts for journal pages are very common), a video tape or two, psychic visions of the past, and, very likely, notes on the wall in human blood.

This setup is not uncommon outside of video games, but the focus on discovering these fragments of the past is typically much stronger in the game — the interactive medium is particularly well-suited to this kind of storytelling, as it lets the player control the pace and order at which the story is told, but the story itself needs not account for the player's pesky free will getting in the way.

It also allows all the storytelling and character interactions to happen non-interactively (often in cutscenes), which actually increases realism, as these sorts of scenes are nigh-impossible to do well interactively.

There are some parallels with Ontological Mystery, although typically the characters know how they got there. Super-Trope to Slept Through the Apocalypse. Not to be confused with The Cavalry Arrives Late.

Alternative Title(s): Late To The Party