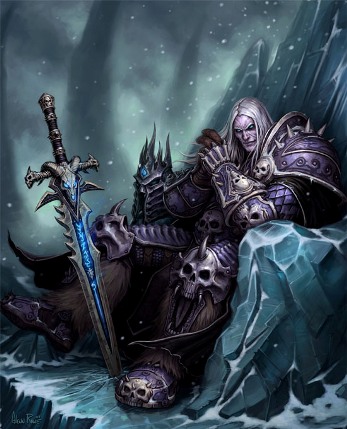 Who needs Hellfire when you're this cool?
"In fire there is the spark of chaos and destruction, the seed of life. In ice there is perfect tranquility, perfect order, and the silence of death."
— Icy Manipulator,

Evil is not only dark, it is also cold and deadly, while good embodies warmth and life as well as light.

Much more likely for the Big Bad or Evil Overlord than pettier sorts of villains. Tends to factor into Fisher King. Whereas Good is probably located in the Ghibli Hills or Arcadia, Evil is invariably located in the Grim Up North or the "icy wasteland" version of Mordor.

Very common for The Undead. Even ghosts leave conspicuous cold spots where they wander.

Can feature with a Winter Royal Lady, An Ice Person or Tragic Ice Character, but does not have to; ice can also be an elemental power unrelated to good vs. evil. The key is whether the cold is used as an indicator of evil and death. It will be more destructive than other elemental powers in this trope. Evil items like the Artifact of Doom may exhibit this as Thermal Dissonance; they're always cold no matter where you put them.

The obvious foil to Fertile Feet. Indeed, it may not be clear in a story whether the return of sunshine, life, and warmth is owning to the hero's influence or because the Big Bad's has No Ontological Inertia. (Babies Ever After may coincide with this — or function as a mundane alternative.)

The elemental opposite is Evil Is Burning Hot. However, the two aren't necessarily mutually exclusive within a single setting. Extreme temperatures in either direction are inimical to human life, so there are evil forces in fiction who make use of both to make our heroes miserable.

May be a factor in why Spring Is Late is such a dangerous trope.

Not to be confused with Evil Is Cool.