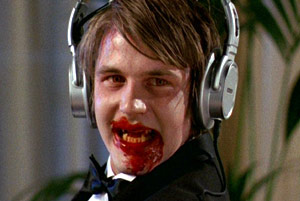 This party is about to get wild
"Don't worry. This will soon be over. Dawn is... just a month away."
Advertisement:

Written four years before the 30 Days of Night comic and released a year before the movie, the first Swedish vampire film shows a crazy Nazi-vampire (yes, Nazi-vampire) living up in the frozen north of Sweden where the sun does not show up for a month. The arrival of medical doctor Annika and her teenage daughter Saga unleashes the worst bloodbath Sweden has witnessed since the vikings, where everything from cute little bunnies to waffen-SS gets torn apart by vampires.