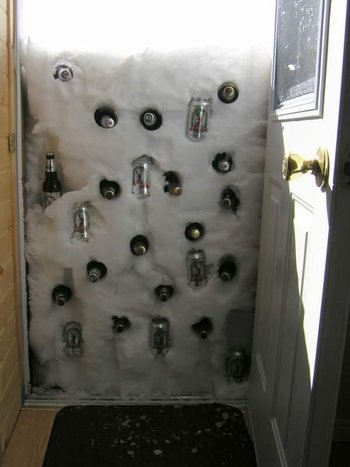 The Canadian answer to being snowed in.

An easy way to isolate a place. A frequent manifestation is the snow day. Sometimes this is any snow at all, sometimes you'll at least require that the roads be blocked with it. Used in a wide variety of situations: Locked Room Mystery, Locked in a Room (especially—duh!—Locked in a Freezer), A House Divided, The Siege, Ten Little Murder Victims, an Eerie Arctic Research Station...

On a lighter note, if a couple (or potential couple) happen to get snowed in together somewhere cozy, remember that Snow Means Love... (especially if There Is Only One Bed). A still lighter note may produce a Snowball Fight. More darkly, it might result in going mad... or worse.

This trope has been used a lot in soap operas for both dramatic and romantic purposes.

Rarer variations include Hostile Weather such as heavy rain, wind or similarly extreme weather conditions. See also Heat Wave. The unfrozen version of this trope is Rain, Rain, Go Away. See also Caught in the Rain. For another way the snow can cause drama, see Braving the Blizzard.

No relation to Edward Snowden. Sorry, we had to go there.