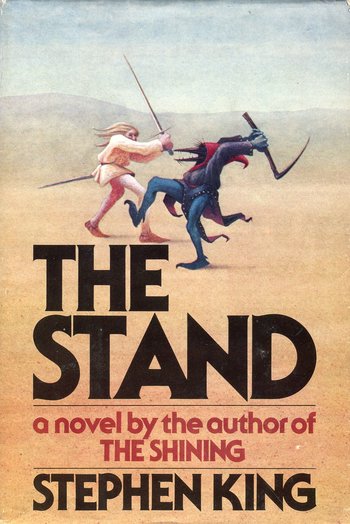 C'mon, baby, don't fear the reaper...
Graffiti written on the front of the First Baptist Church of Atlanta in red spray paint:
"Dear Jesus. I will see you soon. Your friend, America. PS. I hope you will still have some vacancies by the end of the week."
Advertisement:

One of Stephen King's best-regarded (and thickest) novels, The Stand is a classic work of modern apocalyptic fiction. It is the book which introduces (and primarily describes, on Earth at least) King's most famous villain and "antichrist" figure, Randall Flagg.

King set out to write "an American Lord of the Rings", although he later demurred as to whether he was successful. Still, it is often rated his most popular book, and, along with IT, one of the most important works of King's early period.

The story concerns the travels and travails of well over a dozen characters following intersecting story arcs across the United States during and after an apocalyptic Super-Flu nicknamed Captain Trips kills 99.4 percent of humanity. The survivors are left to cope with their loss and stay alive, until everyone starts having dreams that signal the arrival of an even darker menace...

First published in 1978, the novel was reissued in 1990 in a "complete and uncut edition" containing about 400 additional pages of material from King's original manuscript.

In the 1980s, a film adaptation was planned, but ultimately was not made due to the length of the book and issues with adapting the narrative. However, an eight hour made-for-tv Mini Series based on the novel, The Stand, aired for four nights on ABC in 1994 instead.

In January 2019 (and following a dizzying series of script and directorial changes over the course of four or five years), CBS announced it was officially picking up a 9-episode run of ''The Stand''note It was originally 10 but was reduced to 9 due to production issues mostly caused by the 2020 Covid-19 global pandemic. for its CBS All Access platform to premiere in December of 2020.

We need help, the poet reckoned.