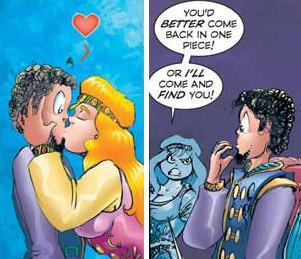 Link: How about a kiss, for luck?
Zelda: You've got to be kidding.
— Link: The Faces of Evil
Advertisement:

The Hero is just about to take on a herculean and possibly life-threatening task, be it facing down the Big Bad, barging into a burning building, or even trying to clear a massive Bottomless Pit. All his friends are depending on him, and time is running out, but he still may be a little nervous and apprehensive. He needs some sort of Heroism Incentive.

All he needs is a little peck and he'll be ready to go.

A Motivational Kiss happens when someone, almost Always Female, gives the main protagonist a kiss that gives him an extra boost in confidence. The kisser will often, but not always, be the protagonist's Love Interest, or at least someone with whom he's been Ship Teased in the past.

May sometimes overlap with Forceful Kiss, Last Kiss, Now or Never Kiss, or a (successful) Comically Small Bribe. Inverted by the Smooch of Victory.

Alternative Title(s): A Kiss For Luck