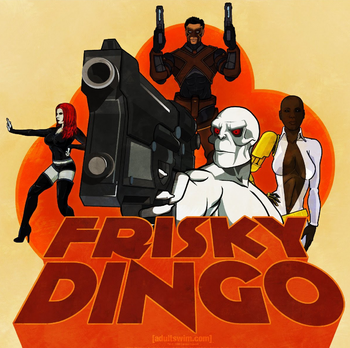 The supervillain Killface dreams of blasting the planet Earth into the Sun. He just has one small problem: he wants to announce his intentions to the world and show the masses the doomsday engine ("The Annihilatrix") that will bring about their doom. Since he doesn't have the technology to hijack the airwaves, let alone the money to purchase airtime to announce his scheme, he's pretty much screwed. All he can afford is a batch of promotional postcards (with poor grammar).

On the opposite end of the spectrum, we find Xander Crews, a spoiled, sociopathic billionaire who parades around as a super-suited superhero named "Awesome X". After Awesome X executes his last remaining arch-nemesis, Crews family adviser Stan pressures Xander to retire from the superhero game and finally start running the family business. (After all, if Awesome X and his support team of "Xtacles" have no more villains to fight, how will they sell Awesome X action figures?) After getting his hands on one of Killface's postcards, however, Xander sees the perfect way to keep Awesome X (as well as the toy line) alive—and the perfect way to keep the Xtacles from getting fired and going on a Roaring Rampage of Revenge.

Season 2 deals with the fallout of the Annihilatrix being activated at the end of the previous season. Thanks to the melted couplings, the Annihilatrix malfunctions and pushes the Earth just barely away from the sun, curing Global Warming in the process. For this, Killface receives worldwide acclaim and decides to enlist the help of a woman named Dottie Bunch - “the Kingmaker” - to help him run for president. Meanwhile, Xander Crews has been living on the streets ever since he lost (then immediately regained) his entire twenty-billion-dollar fortune. Hearing from Killface’s documentary team that the latter is running for president, Xander decides to follow suit. This reshapes the show for a lengthy presidential election arc, which every surviving character and subplot from the first season gets involved in.

A spinoff series set after the second was planned, named “The Xtacles”. The show was cancelled after two episodes, which involved the Xtacles, now travelling aimlessly following Xander leaving Earth in Killface’s spaceship at the end of Season 2, (barely) following orders from the new president of the United States, Stan.

While the staff planned a third season, the absence of a renewal contract from [Adult Swim] and the time spent on the only two episodes of The Xtacles left the show permanently shelved.

After Frisky Dingo's cancellation, the animation studio behind it (70/30 Studios) shut down—but that turned out for the best, as the creative team behind the show eventually produced a hit show about a super-spy with sociopathic tendencies that has run eleven seasons and counting.

It airs in the land of the dingo on SBS2.

We can't ever go back to Arizona—but we can look at the tropes from Frisky Dingo: