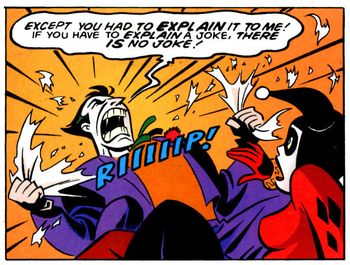 It seems jokes are something The Joker doesn't like to kill. Get it? It's because he's a murderer with a comedy theme!
"Humor can be dissected, as a frog can, but the thing dies in the process and the innards are discouraging to any but the pure scientific mind."
— E. B. White
Advertisement:

A Sub-Trope of Measuring the Marigolds. Compare Lampshaded Double Entendre and Euphemism Buster, "Just Joking" Justification. May be the outcome of Poe's Law, when a satire/parody fails because the audience didn't realise it is a satire/parody and took it seriously.

open/close all folders
Advertising
Anime & Manga
Comedy
Comic Books
Comic Strips
Fan Works
Films — Animation
Films — Live-Action
Literature
"Chet, old sport," Jack said, giving Chet a pat on the back, "thanks for being the cavalry, and I'll see you back at the orifice in a few minutes." "Orifice" was a comical malapropism for "office" that Jack and Chet frequently used when speaking with each other."
Music
Podcasts
Print Media
Pro Wrestling
Puppet Shows
Radio
Roleplay
Sports

"IF YOU HAVE TO EXPLAIN A JOKE, THERE IS NO JOKE!"

"IF YOU HAVE TO EXPLAIN A JOKE, THERE IS NO JOKE!"