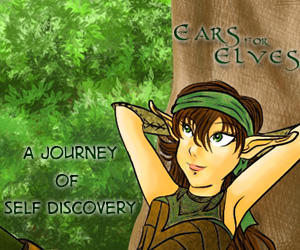 is a lighthearted webcomic on the high end of the fantasy scale, with touches of Heroic Fantasy. It follows the story of Tanna Teasen'atear as she grows from a youngling into adulthood and finds her place in elven society. Started in 2011, it is the first online graphic novel by Naarie Kermie, though it is currently on hiatus. The site is maintained and edited by Archmage, and links to us, accounting for the high number of inbounds—our character sheet has even replaced the official one (though that's still accessible through the direct URL)!

It's always been expected that Tanna, a highborn wood-elf, would follow in her parent's footsteps and be the model nobleman's daughter—even her friend Zalanna tries to push her into this role. However, Tanna doesn't like being cast in that way, and dreams of being a Village Guardian, practicing shooting and tracking often in hopes of becoming as good as warrior Luero. Others don't believe she'll ever make it, especially with having to babysit her younger brother Donn alongside all that she does, but she's gone too far away from the world of dancing and meetings that her parents are part of to reconsider.

Until a stranger knocks her down and then vanishes away.

Enter Drethalrolan, not that Tanna can remember his name. He's a high elf, and for this reason a number of wood elves are prejudiced against him. His charming ways from a different culture win over many of them, but at first Tanna views them as arrogant and annoying. However, after sorting out some misunderstandings they become friends—leading to more misunderstandings when Donn mistakes Rolan for Tanna's boyfriend.

But that is soon forgotten when the prejudice against Rolan becomes clear in the marketplace. In an attempt to make people accept him, Tanna sneaks into the ancient druidic Religious Temple of Herutaure, and gives him a formal welcome with flowery prose. Her temple tour doesn't last long, though, when several elves enter carrying another severely wounded dark elf. Turns out that that's a secret, though, as after Luero finds, hides, and gets her out he ensures she knows to forget it happened and never mention the incident.

Ears for Elves contains examples of:

Please add tropes about the main characters to the character sheet.