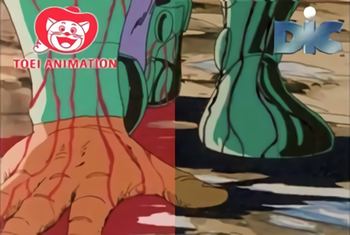 The problem with violence is that people tend to bleed when they are stabbed. Blood is scary. But changing the color of blood to something like black makes everything family-friendly, right? Pools and pools of nice, safe, black blood... Never mind the original violence.

With any luck, this is just something tacked on to fit broadcast standards, with a more realistic color used for the DVD release.

Some opt just to not show blood at all despite any violence.

Black-and-white comic books (which includes most, if not all, manga) generally have black blood (where it's featured) out of necessity.

Not to be confused with cases where the "blood" is supposed to be a different color, like with robots or some aliens, or it's an indication of a severe condition (say, being fatally poisoned). It's worth remembering that a large quantity of blood (especially venous) will look close to black, which is where this colour choice comes from in the first place.

This is common in some video games as a form of Adjustable Censorship, where the player has the option of changing the blood color from red to something less realistic.

Also, please note that since it is the iron in our blood that makes it red, this trope is almost Truth in Television for the anemic. Almost.

When Ancap shoots down two Impossible Ideology Monsters (one of which was Pan-Africanism), they both bleed black, fitting with their Deliberately Monochrome nature.

When Ancap shoots down two Impossible Ideology Monsters (one of which was Pan-Africanism), they both bleed black, fitting with their Deliberately Monochrome nature.