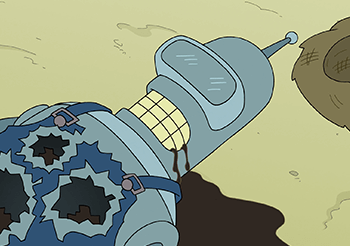 "If you prick me, do I not... leak?"
— Data, Star Trek: The Next Generation, "The Naked Now"
Advertisement:

In works centered around or containing robots, vehicles, Mechanical Lifeforms androids, machines, mecha, etc., creators add a human element to the artificially created beings to set the tone and so that the audience will have an easier time relating to the characters. Using oil, coolant, battery acid, hydraulic fluid or some type of unusually colored liquid as a stand-in for blood makes things look a lot more serious and visceral in action scenes. It also makes the audience more sympathetic if the "bleeding" robot is one of the protagonists or a tragic character.

In some works, the fluid is red and visually-indistinguishable from actual blood. In others, it really is artificial blood and the mechanical life forms are Ridiculously Human Robots.

This may be an android's Robotic Reveal, confirming it's not biologically human. In other cases it may not reveal anything - if it's not confirmed whether the Ambiguous Robots are bleeding or leaking, it only makes them more ambiguous.

Sometimes used as a way to pass the censors in G and PG-rated works where real blood, especially excessive blood, is considered inappropriate for younger audiences. If the fluid looks too much like blood in a work that was originally from a foreign country, some regional localizations are likely to either change it to look like regular oil or just edit out the blood completely. What Measure Is a Non-Human? is at play as people are generally more comfortable with robots/machine character "bleeding" than human characters as long as their blood doesn't look human.

See also Alien Blood, where aliens have weirdly colored blood and Symbolic Blood, where something else is used in place of blood either for comedy or for symbolism.