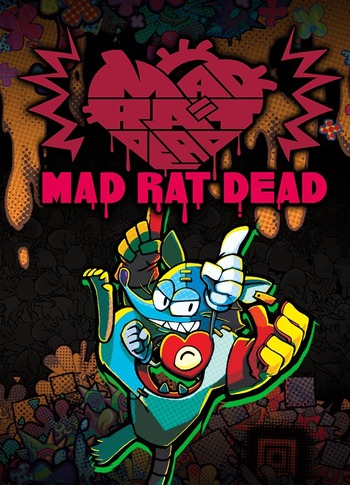 Wreak Havoc to the Rhythm!
Mad Rat Dead is a rhythm-action game by Nippon Ichi. It was released in Japan on October 29th, and in America and Europe on October 20th, 2020 for Playstation 4 and Nintendo Switch.
Advertisement:

The plot follows a lab rat (called 'Mad Rat') left for dead after a Mad Doctor dissects his heart out. In the afterlife, a mysterious being known as the "Rat God" offers him the chance to relive his final day, giving him a new heart with time-rewinding powers. Deciding to change his fate of ending up on the cutting board, he uses his new heart to travel back in time. Now accompanied by his (now talking) heart, he must get revenge while keeping to the beat.