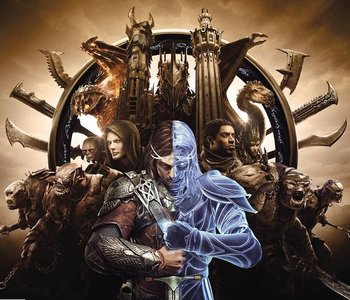 "The time has come for a new Ring."
"The world of Men is ending. In the fires of Mount Doom, a Ranger and a Wraith, bound together in death, crafted the one thing that could challenge Sauron: a Ring of Power. But power can blind those who seek it. The Great Deceiver has returned to Middle-earth, to rebuild his armies, to rule all. The corruption will be contained no longer. The war for Mordor begins."
Advertisement:

Taking place in an Alternate Timeline version of the events leading up to The Lord of the Rings, the game continues to follow the fallen Ranger Talion (Troy Baker) and the wraith of Celebrimbor (Alastair Duncan), the Elf-lord who once helped to forge the One Ring. Picking up where Shadow of Mordor ended, the duo forge their own Ring of Power and attempt to defeat the menace of the Dark Lord Sauron, even if it means that they must become Evil Overlords themselves in the process.

The "Nemesis System" from the previous game returns, where procedurally generated enemy commanders have running character histories and abilities that develop as you continue to interact with them, their superiors, and/or their underlings. The game expands on this system in numerous ways: for example, followers' loyalty is no longer absolute, but rather is determined by various factors such as your actions (or inactions) and their own ambition; also, you can shun followers out of your army or Mind Rape enemies into insanity.note In 2021, Warner Bros. Interactive successfully patented the Nemesis System after a string of rejected attempts dating back to 2015. Another key addition to the game is fortress assaults, where you lead your troops in an attempt to conquer the local fort, defeat its overlord, and seize control of the region.