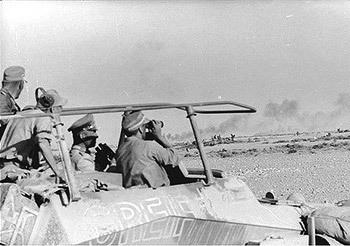 Erwin Rommel gets up close and personal with the British in Africa.
"Look! There is Jackson standing like a stone wall. Let us determine to die here, and we will conquer. Rally behind the Virginians!"
— General Barnard Bee at the First Battle of Manassas during The American Civil War
Advertisement:

A flag-ranked officer — though not necessarily a Four-Star Badass — who spends more time leading his men at the frontline battlefields like a junior/field officer does than sitting in the war room and working on theater-level strategic plans.

Depending on the setting or the branch of the military, this can be easily justified; a fleet of ships, or even a single larger ship such as a modern Supercarrier, will often be commanded by a Rear Admiral or higher. Pre-Radio Age armies would also be often directly commanded by generals on the field, too, to the point where it was almost common for generals to be killed in battle. In a modern land army, however, such a thing would be very unusual (excepting an officer taking a very short visit to scope out the terrain while planning a major offensive), and typically would only happen if the country gets invaded by complete surprise, and/or the enemy gets very deep very fast.

While seen as highly heroic, there are significant drawbacks to this, especially in modern settings. Battles hinge on minute-by-minute decision making and updates must be frequently provided to the general staff. If the general is on the front, he'll be moving around a lot and it will be more difficult to apprise him of the situation, not to mention him giving updated orders for those lower in the chain-of-command. In the long run, the Confederacy during The American Civil War lost many good generals this way.

This can be justified in a Mildly Military organization, especially in the case of La Résistance, as the command infrastructure may not be deep enough and the crisis is too severe to not implement an "all hands on deck" situation.

In strategy games, they can take the form of hero units which sometimes represent the Player Character, thus averting the Non-Entity General trope in the process.

Contrast Armchair Military (a.k.a. "Chairborne Ranger" in US Army and Marine Corps lingo) and Soldiers at the Rear. See Outranking Your Job when this is taken too far. May overlap with Royals Who Actually Do Something in historical settings. Doing this increases the chance of a Keystone Army by a lot, and makes you an easier target if they want to go right after you. A Decapitated Army may result if the general dies. Often justified if Authority Equals Asskicking, and might be a requirement of the position if Asskicking Equals Authority. Also, an Uriah Gambit is a not-so-uncommon reason to send a general into the harm's way.

Compare The Main Characters Do Everything.