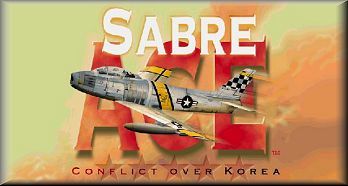 Sabre Ace: Conflict Over Korea is a 1997 air combat simulation game for Windows, set during the Korean War. It was developed by Eagle Interactive and published by Virgin Interactive; the rights are currently owned by Interplay.
Advertisement:

The game features arcade-grade flight physics, but otherwise is a decent approximation of a little-explored period in air combat, when propeller-driven planes first began to be replaced by jets on a large scale. It contains Internet multiplayer and two linear single-player campaigns, one putting you in the shoes of a US Air Force pilot in the UN coalition, the other portraying a Soviet Air Forces pilot flying for North Korea. Only five planes are playable but many more are present.