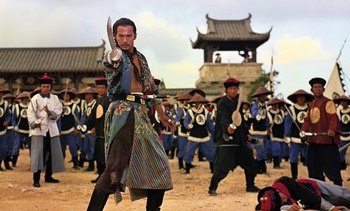 "Must... show... abs... no matter what!" - Ti Lung, probably. note And YES, that is the back end of a dagger embedded through his torso.
Advertisement:

In the twilight of the Qing Dynasty, a former soldier Chiang Wen-hsiang (David Chiang) and a hoodlum Huang Chang (Chen) befriends a scholar and warrior, Ma Xin-yi (Ti Lung), under the most unlikely circumstances. Deciding to become sworn brothers and lacking an aim in life, the trio decides to join the Imperial Army, on a military campaign during the Taiping Rebellion

. But as their ranks in the army grew through the years, their ambitions may lead to their eventual downfall.

At the 11th Golden Horse Awards, Ti Lung won the Special Award for Outstanding Performance in the film. It's worth noting that his character, Ma Xin-yi

, is very loosely based on a heavily-fictionalized account of a real-life military general that served in the Qin Dynasty.

This movie will notably, a few decades later, inspire Peter Chan's The Warlords, with Jet Li, Andy Lau and Takeshi Kaneshiro in the roles previously filled in by Ti Lung, Chen Kuan-tai and David Chiang.