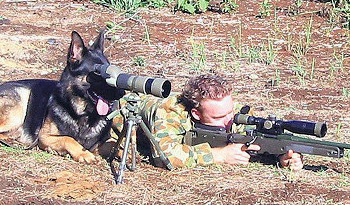 "Spotting" is a military term for relaying the coordinates of the enemy to an allied unit (usually an artillery battery or a sniper) so it can take them out from a long distance, without putting itself in danger. The spotter is usually a small mobile unit that approaches the enemy hopefully undetected, calls in a shot and moves on—but really, any unit can act as a spotter, given long range backup. A snipers' spotter also has the additional job of guarding the sniper from flanking attacks, something that is a little hard to do when they're currently focused on lining up their shot through a zoom scope.

Target spotting is often a gameplay mechanic in tactical games where some units deliberately have longer firing range than viewing range. This allows these units to target enemies even without a direct line of sight, provided another friendly unit can see them. Whether they need a direct line of fire, depends on their type: snipers usually do, artillery usually doesn't.

For handheld target designators (with which these spotters may be armed), see Puppet Gun.

May overlap with Seeing Through Another's Eyes in speculative settings.

Examples of this trope as a game mechanic:

open/close all folders
Anime and Manga
Fan Works
That was good enough for her. Aiming for the average dwarf’s height, she brought a Shabon Spray Freezing from her storage and launched it at the indicated location.
Film
Literature
Video Games
Webcomics
Feedback