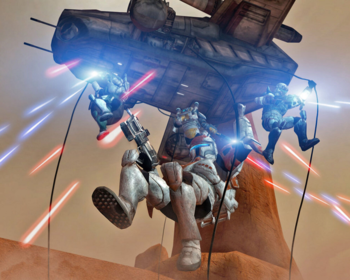 Johnny Rico: This is Roughnecks 201. We are under heavy attack! ... I request retrieval, now!
Radio Operator: On the outpost? That's crazy!
Johnny: Well I hope you have a crazy pilot. Out!
— Starship Troopers
Advertisement:

The heroes are facing overwhelming odds, probably their Last Stand. Everything looks hopeless and there is no possible way they can survive this. There's only enough time for a Final Speech. It almost looks like they are heading for a Bolivian Army Ending, when suddenly... The Air Cavalry is here!! An allied aircraft swoops overhead and loops around for another pass! The enemy (one that uses Hollywood Tactics, anyway) just got raked from above!

It is often set up to be a complete surprise to the ones being rescued. That way, when the gunship lowers into place it produces squeals of joy from the audience. The real joy is the look on the enemy's face when the gunship appears and they have to stare down the machine guns, missile pods, lasers, or whatever other kind of heavy firepower is mounted on the craft.

Often preceded by It Has Been an Honor. It also invokes some resemblance to Death from Above, and can often include an awesome looking visual of the rescuers doing a flyby, often putting themselves between the rescuees and the bad guys. Also likely to include the soul-shaking noise of big aircraft engines... followed a chorus of gun booms, rocket fwooshes and laser pews.

When played straight, this is a variant of The Cavalry. Not classified as Deus ex Machina, since most times it is set up in advance and rarely anticlimactic. And while most examples are of aircraft, specifically helicopter gunships or the Technology Level equivalent, ground vehicles and ocean vessels with a BFG mounted can sometimes be used for a Gunship Rescue. Compare Orbital Bombardment.

Followed immediately by,
Maxim #5: Close Air Support and Friendly Fire should be easier to tell apart.

Cortana manages to control the Condor to strafe and take down Covenant forces while Silver Team uses it to get the artifact and escape before more Covenant reinforcments arrive.

Cortana manages to control the Condor to strafe and take down Covenant forces while Silver Team uses it to get the artifact and escape before more Covenant reinforcments arrive.