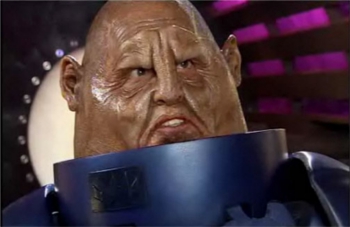 The one featuring the return of the baked potato aliens, Martha Jones, and a wussy teenage brainiac who makes Wesley Crusher look good. Oh, yeah — we went there.

Paging the Doctor! When Martha gave the Doctor her old phone, this is the kind of situation she had in mind.

Since he left, remarkable strides have been made in environmental engineering: in particular ATMOS, a gizmo installed in half the cars on Earth which neutralizes exhaust, with only the tiny side detail of being completely evil and a front for alien murders. ATMOS is the creation of a teenage genius by the name of Luke Rattigan, who is secretly working for the Sontarans, a warrior race of militaristic short guys who look a bit like potatoes. (Though the Doctor would like to remind you that to a Sontaran, you look like a shaved pink weasel-thing.)

Martha and Donna are introduced and, to the Doctor's great relief, get on really well. Martha's now a proper doctor, and with UNIT. The Doctor's a little bit uncomfortable with how well she fits into a military organisation. She retorts that he's the one who got her the job in the first place. He wisely doesn't respond to that.

The Doctor teams up with UNIT, but he doesn't like the way things have changed since the old days, and the reunion is an uneasy one. The Brigadier (now knighted) is a few continents away and unable to help out. Also, Martha is kidnapped by the Sontarans, and they create an evil clone of her.

Meanwhile, Donna goes back home to get another earful from her mum, and to see Wilfred, her dear old grandad, again. The Doctor turns up to fetch her (and meets a delighted Wilfred and a highly apprehensive mum), just in time for all the ATMOS-equipped cars in the world to begin emitting clouds of poison gas! How can the Doctor stop an alien attack that's occurring in 400 million places at once?