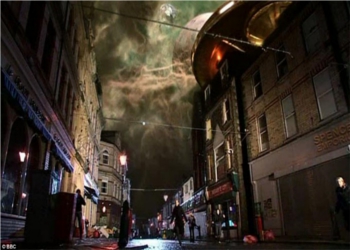 Toto, I don't think we're in the Solar System anymore...
"Saturday? Good. Good, I like Saturdays."
— The Doctor
Advertisement:

The one where all three vectors of the Whoniversenote at the time intersect. It's also the one with the return of Big Daddy Dalek.

After the end of "Turn Left", the Doctor races back to Earth to find that... everything's fine? Not exactly. The BAD WOLF from the last episode was, like all the others, a message from Rose. As Rose has been trapped in a parallel universe since "Doomsday", the Doctor realises that the walls between universes are breaking down, but he's not sure why, so they go back to the TARDIS to check. They are suddenly jolted, and the Doctor and Donna run to check outside. Instead of seeing the street and the milkman there a moment ago, they find that the TARDIS is...

The Doctor races to the controls to see where the TARDIS has moved but then realizes that, in fact, they haven't moved at all. Their location is fixed.

The Earth is gone.

Far across the universe, we join everybody we've known since the show's revival in 2005. Martha Jones with UNIT in New York; Jack, his boyfriend Ianto and their friend Gwen in the Cardiff Hub; Sarah Jane, her adopted son Luke and their supercomputer Mr Smith in Ealing; Sylvia and Wilfred in London, and they've all felt what they think is a massive earthquake. That is, until each races outside to look at the sky. Martha calls Jack, but no one knows what's happening and no one can reach the Doctor. Just then, Action Girl Rose, complete with a BFG on a shoulder strap, zaps onto the street, steeled and ready to go.

The cheery morning sky has been replaced by night and disturbingly low-hanging planets. No, really. Richard Dawkins is on TV talking about it and everything. There are giant planets in the Earth's sky, and not a single familiar star.

Back at where the Earth isn't, the Doctor decides that now is the time to call in reinforcements, so he heads out to the Shadow Proclamation.

Teams Torchwood, Bannerman Road and UNIT detect 26 other planets and a fleet of mysterious spaceships heading directly for the Earth. Who could they possibly be? Everyone tries to call the Doctor, but no one can get through. Then, an eerily familiar transmission comes in from the incoming ships...

Jack, Martha and Sarah recognise the sound immediately. Jack pulls Ianto and Gwen close and kisses their foreheads. He says, "There's nothing I can do. I'm sorry, we're dead." Sarah hugs Luke, sobbing. Action Hero Rose, however, picks up her BFG and heads out into the street, her hair blowing from the explosions behind her.

The Daleks commence "ultimate extermination" on the Earth.

Back at the Shadow Proclamation, after a nifty bit of Judoon from the Doctor, our heroes try to piece the situation together. Once he puts his Purely Aesthetic Glasses on, the Doctor realises that if you steal 27 specific planets out of space and time, they sync with one another to make a giant galactic-strength engine! That's what's been happening to all those missing planets (and one missing moon) we've been hearing about. Now, if only he can figure out where they went. The Doctor asks Donna if she can remember anything out of the ordinary back on Earth. She can't, except the bees had been disappearing. The bees? Yes! The bees! The Doctor explodes into some lovely techno-babble about the bees, some of which have been aliens all along, sensing danger and fleeing to their home planet and now the Doctor can trace their journey and find Earth! Allons-y!

Oh, and a creepy Shadow Proclamation woman says sorry to Donna about her loss that has yet to come. Poor Donna.

Things look bad. Earth surrenders to the Daleks, Wilf's awesome plan to beat the Daleks with a paintball gun fails, the Doctor gets lost in the Medusa Cascade, Captain Jack waxes melancholy and no one's phones work. But guess who hasn't given up yet? That's right, Harriet Jones (former Prime Minister)! note Yes, we know who she is. She patches together a Doctor Who co-star conference call, using a subwave network she helped develop specifically to contact the Doctor... despite the fact that the Doctor ruined her life last time they met. Everyone Meets Everyone. Jack hits on Sarah Jane (and a little bit on Luke), Rose feels bad about not being included (because Sylvia wouldn't let Wilf get a webcam for their laptop because she thinks they're naughty), and they make a super mega phone call to the Doctor! The Doctor latches on and even though the TARDIS catches fire a little (it gets better), he finds his way to Earth!

Unfortunately, Harriet Jones (former Prime Minister) is found by the Daleks and sacrifices herself in a noble and dignified fashion. Good show, Harriet. Good show.

Everyone is happy to see each other. Ianto checks out the Doctor, Donna picks the worst possible moment in history to start fancying Jack, but all of this "outer space Facebook" action is wrecked by a very familiar voice. The Doctor and Sarah Jane recognize... Davros! Back from the dead! Again!

The Doctor takes off, and everyone goes after him. The Daleks go on alert, Jack gets his vortex manipulator working again with a little help from Martha's UNIT knowledge and teleports away, Sarah Jane drives off leaving Luke with Mr. Smith, Martha is ordered by UNIT to blip out and activate something called the Osterhagen key, and Rose zaps after the TARDIS.

Rose is the one that finds him first.

Rose and the Doctor see each other across a destroyed street. Overjoyed, they run towards each other, but before they reach each other, a Dalek appears and zaps the Doctor. Jack appears and blows up the Dalek. Rose, Donna and Jack gather around the Doctor, but it is clear he is dying. They take him back to the TARDIS.

The Daleks are closing in on team Torchwood and Sarah Jane. The Doctor begins to regenerate, energy bursting from him in a bright orange display.