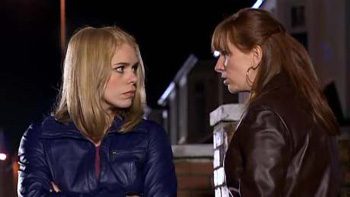 Rose, it's about time you truly appeared this season!
"Turn right, and never meet that man. Turn right, and change the world!"
— Fortune Teller
Advertisement:

The one where Rose returns and we find out what the universe's like without the Doctor in it.

The Doctor and Donna drop by the Chinese-inspired planet Shan Shen, a long way from Earth. The Doctor does some shopping while Donna lets herself be talked into a free fortune-telling session. But the fortune-teller is interested in Donna's past, not her future... specifically, she wants to know how Donna came to meet the Doctor, going all the way back to a single decision. Something creepy and crawly moves towards Donna and latches onto her back.

Remember "The Runaway Bride", when we first met Donna? She was marrying a guy she'd met at work. Flashback to Donna's first day at H.C. Clements. Her mum comes along, and harangues Donna about interviewing for a different job, a better job, with some guy she knows. All Donna has to do is turn right instead of left at a certain intersection, and she'll never have started at H.C. Clements, never have met Lance, never have been sucked aboard a TARDIS in flight, never — and this is the crucial bit — told the Doctor to stop when he was murdering a Racnoss nest. So the Doctor drowned in the Thames and died permanently that Christmas Eve, and Donna didn't much care, because she never knew who he was. To Donna, the only thing out of place seems to be the fascination her friends have with something on her back that they glimpse, and Rose Tyler suddenly turning up looking very distressed.

Earth, as it turned out, would end up caring very much.

When the Royal Hope Hospital was transported to the Moon the Plasmavore was stopped, but the hospital was trapped on the Moon until it was too late. All but Oliver Morgenstern died — including medical student Martha Jones — and the Earth escaped destruction only because one Sarah Jane Smith, at the hospital with Luke, Maria and Clyde, was able to deactivate the Death Ray before dying.

Without the Doctor around to stop it, the starship Titanic crashed into London the following Christmas, destroying the entire city with its nuclear engine. Donna and her family are OK, because they left London for Christmas on Rose's advice.

Rose keeps popping up in Donna's life as it continues to suck more and more. Aid promised from the United States to the victims of the nuking of London is cancelled after the Adipose kill millions of them. The Sontaran stratagem very nearly succeeds, as well; it is stopped only by the Torchwood Three team, at the cost of their lives and leaving Jack stranded on the Sontaran homeworld.

Donna and her family are forcibly moved to Leeds, while the minorities are shipped off to "labour camps". One night, when Donna notices that The Stars Are Going Out, she finally decides to follow Rose.

Rose, remaining nameless, explains who the Doctor was and that he was never supposed to die. She takes Donna to a UNIT operations base where they have hooked up the Doctor's TARDIS to their equipment, which includes a circle of mirrors. Rose and UNIT use the equipment to show Donna the presence of a large beetle riding her back, though they can't remove it. Instead, Rose tells Donna that they are going to correct the timeline, but it requires sending Donna herself back to fix it. After realising this might wipe her from existence, Donna agrees to do so, and is told to stop herself from turning right on that fateful day.

The time jump leaves her half a mile away with only a few minutes to get to the intersection, which is impossible. Without any other options, Donna throws herself in front of an oncoming vehicle, fatally wounding her, but creating a traffic jam for which her earlier, impatient self is unwilling to wait, and makes the left turn. As the alternative Donna dies, Rose appears again to her, and before she blacks out tells her a two-word message to give to the Doctor...

Donna wakes up in the fortune teller's tent, the Time Beetle having fallen off her back, dead. Stunned and horrified, the fortune teller scurries away as the Doctor arrives. Donna explains what she saw, and the Doctor explains that the Time Beetle is part of the Trickster's Brigade. Donna wasn't picked for any special reason: stealing timelines is just what the Trickster's Brigade does, and it usually has no major effect. Donna just happened to be a bit more involved in time-shattering events than the usual victim. The Doctor casually comments on all the coincidences around Donna, when she suddenly recalls Rose. The Doctor, instantly alert, asks Donna for more information, and Donna repeats her last words:

The Doctor races outside to find every banner and sign, even the TARDIS doors, now saying "BAD WOLF". Upon running inside the TARDIS, closely followed by Donna, he hears the Cloister Bell has started tolling, signifying that now is the time for a touch of Oh, Crap!

Donna: Doctor, what is it? What's Bad Wolf?
The Doctor: It's the end of the universe.